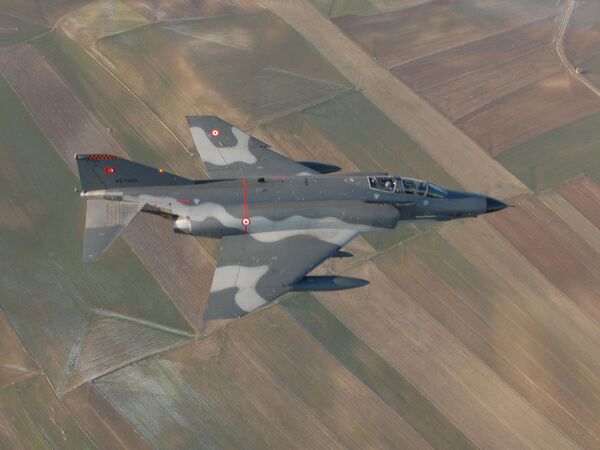 © Photo : Official Website of the Turkish Air Force
Subscribe
The foreign ministers of 27 EU members states condemned on Monday Syria’s shooting down of a Turkish military plane and urged a thorough investigation into the incident.

The foreign ministers of 27 EU members states condemned on Monday Syria’s shooting down of a Turkish military plane and urged a thorough investigation into the incident.

“The European Union notes that this is a matter which needs to be investigated thoroughly and urgently,” the EU Council of Ministers said in a statement.

Syria downed a Turkish F-4 Phantom jet on June 22, saying that it had violated Syria’s airspace.

Turkey said the unarmed plane, which was on a training flight to test Turkey's radar capabilities, had unintentionally crossed into Syria's airspace, but was a mile inside international airspace when it was shot down.

Syria said it was unaware that the jet belonged to Turkey and that it was protecting its air space against an unknown intruder.

The incident has further increased tensions between the former allies, whose relations have suffered a dramatic setback over the Syrian government’s response to a popular uprising against President Bashar al-Assad.

The EU has called on Syria to “cooperate fully with Turkey and allow full access for an immediate investigation, and for the international community to give its support to such efforts.”

NATO member Turkey has long been seeking membership in the European Union.

Ankara has called a meeting of NATO member states on Tuesday to discuss the incident. In line with NATO’s founding treaty, any ally can request such consultations if they feel their territorial integrity or security have been threatened.

The wreckage of the downed jet has been discovered in the Mediterranean Sea, while its two pilots are still missing.

Russian Deputy Foreign Minister Alexander Grushko expressed hope on Monday that NATO would not take any action that would escalate tensions over Syria and undermine international efforts to settle the 16-month-old crisis there.

“Turkey’s turning to the NATO Council in line with Article 4 [of NATO's charter] can be considered a very alarming signal that there is [a possibility of] escalation around Syria,” Grushko, whose is expected to become Russia’s new envoy to NATO, told RIA Novosti.

The international community should make all efforts to find a political solution to the Syrian crisis, he said, adding “control over the process should remain in the hands of the United Nations Security Council.”

Russian military experts said on Monday the Turkish jet was likely to have been performing a surveillance flight to test Syria’s air defense systems.

When the Syrian military made the decision to open fire, they “qualified the target located in the country’s airspace as hostile,” he said.

Turkey’s intelligence has been active in Syria, and “all information obtained in Syria certainly becomes available to other NATO members,” the analyst said.

Another Russian military expert, Said Amminov, agreed that the incident demonstrated the effectiveness of Syria’s air defenses, which largely rely on Russian-produced Buk, Pechora and Pantsyr defense systems, as well as on Soviet-made S-200 complexes.