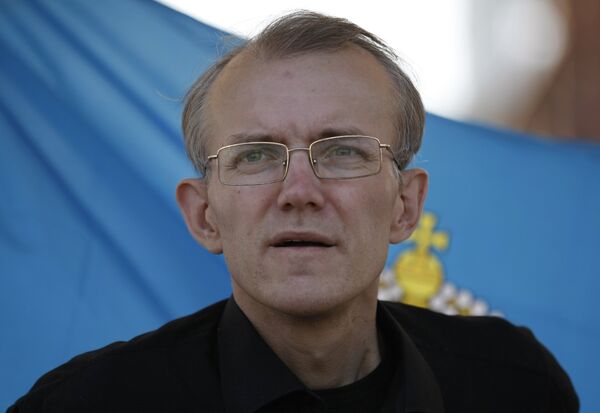 © RIA Novosti . Evgeniy Polonskiy
/
Go to the mediabank
Subscribe
International
India
Africa
A court in the southern Russian city of Astrakhan ordered opposition politician Oleg Shein to pay a 20,000-ruble ($600) fine for organizing a protest march in the city on June 12, when the country marked Russia Day.

A court in the southern Russian city of Astrakhan ordered opposition politician Oleg Shein to pay a 20,000-ruble ($600) fine for organizing a protest march in the city on June 12, when the country marked Russia Day.

Shein, a member of A Just Russia party, became one of the first politicians to be fined according to a new law passed by the Russian parliament in early June that has dramatically increased fines for violating laws regulating mass protests.

Shein made national headlines in the spring by staging a 40-day hunger strike in protest against the results of local mayoral election in which he lost to a candidate from the pro-Kremlin United Russia party.

He was detained by police after he and his supporters staged what police said was an unsanctioned march held on the embankment of the River Volga in central Astrakhan.

Rally participants claimed that they were not taking part in any protests and just gathered for a “stroll” along the embankment. The idea echoes recent protest “strolls” in downtown Moscow, which were tolerated by police.

Shein and four of his supporters were detained after the crowd began chanting what police described as protest slogans. The four activists have been sentenced to administrative arrests for a period of up to six days and ordered to pay fines.

Shein said during his trial that city authorities rejected a request filed by party activists to authorize a protest demonstration.

The June 12 “stroll” was not a protest rally, he said, adding that the songs and slogans that the activists chanted, such as “Russia, Astrakhan, Freedom!” were an expression of their patriotic mood on the national holiday.

Shein told journalists after the court ruling was announced that he was going to appeal the decision.

He also said he was planning to file four more lawsuits in Astrakhan district courts in connection to alleged violations during the March mayoral vote.