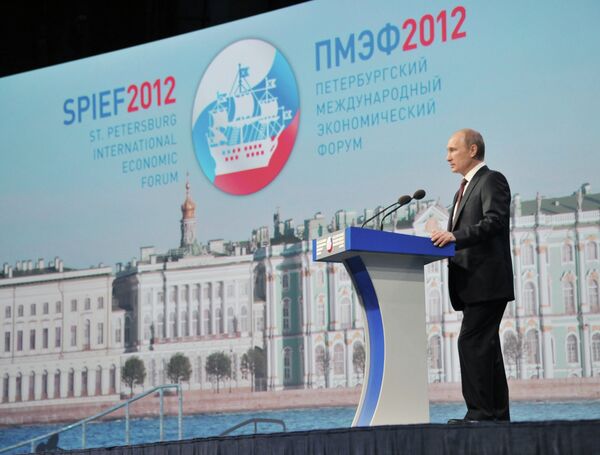 Russia should increase investment from its current level of 20 percent of GDP to 27 percent by 2018, Russian President Vladimir Putin said on Thursday in an address to the St. Petersburg Economic Forum.

Russia should increase investment from its current level of 20 percent of GDP to 27 percent by 2018, Russian President Vladimir Putin said on Thursday in an address to the St. Petersburg Economic Forum.

“Russia should position itself as an exporter of innovative goods and services. New jobs are created, in the first place, by investment. We need to build up its volume to 27 percent of GDP by 2018. I believe this is an absolutely realistic goal and task,” he said.

Putin also said Russia was going to stick to its previously announced plans to create 25 million jobs by 2020.

“We need to edge out the archaic and ineffective employment in the national economy,” he said.

Russia should capitalize on its competitive advantages and focus on the country’s stable development, he said.

“What are our goals? To capitalize on the natural competitive advantages available in Russia, develop new opportunities in the global economy and ensure the country’s stable development. This also means an effective government serving the interests of the state and society, with law-enforcement and judicial systems enjoying citizens’ unconditional trust,” Putin said.

A new round of privatization in Russia should prevent the emergence of private instead of state monopolies, Putin said.

“Without healthy competition, a market economy is no less inclined towards decay than a command and administrative system,” Putin said.

The Russian president said Russia would welcome the participation of large foreign strategic investors in the privatization of state-run companies.

“We, no doubt, will welcome the participation of our foreign partners in privatization deals,” he said. “These should be serious strategic investors.”

Putin also said Russia needed to create a full-scale system of risk forecasting and management to minimize the implications of external shocks and prevent the emergence of a crisis for internal reasons.

“We realize that a probable crisis may be different both by duration and the nature of possible manifestations. That is why I believe that it is important to create a full-scale system of risk forecasting and management. We’ll develop such a system,” he said.

Russia will not curb capital flows, despite the escalation of the eurozone debt crisis and crisis factors in the global economy, he said.

“I want to draw your attention to the fact that we’ll not backtrack on the principle of free capital flows and will not impose any restrictions. We understand well that certainty is important for investors planning to invest funds in Russia,” Putin said, pointing out that during the 2009 crisis Russia also refrained from imposing any curbs on capital flows.

Russia, which is expected to become a member of the World Trade Organization this summer after many years of talks, may also join the Organization for Economic Cooperation and Development in 2014, Putin said.

“I believe this entry may take place already in 2014,” Putin said.