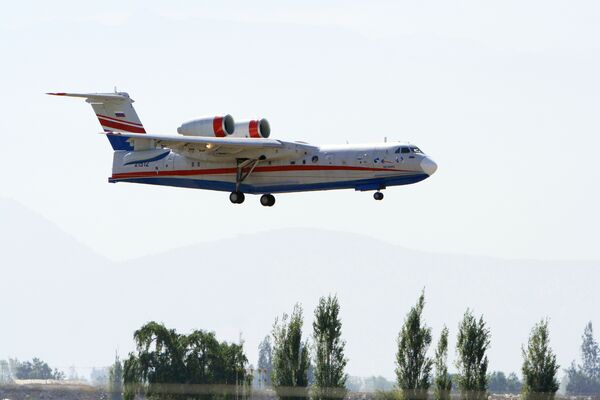 An American company has signed up to buy ten Russian-made Beriev Be-200 amphibian aircraft for use in the fire-fighting “airtanker” role, in a breakthrough contract to the U.S. market for the plane.

An American company has signed up to buy ten Russian-made Beriev Be-200 amphibian aircraft for use in the fire-fighting “airtanker” role, in a breakthrough contract to the U.S. market for the plane.

“We have contracted for 10 Be-200s to use by us under expected federal and state fire fighting contracts,” says TTE’s President, David Baskett.

TTE will lease the aircraft to airtanker operators in the U.S.

The value of the deal has not been disclosed, but in 2010 Russia’s Emergencies Ministry signed a $330 million deal for eight of the planes configured for firefighting.

Neither Beriev, which makes the planes, or United Aircraft Corporation, Russia's aerospace holding company, was available to confirm the deal on Wednesday.

The contract award follows months of trials for the U.S. Interagency Air Tanker Board, which promotes safety of airtanker operations in the U.S..

The aircraft was demonstrated in Taganrog, south Russia in May, and made practice water-drop demonstration flights for United States Forest Service officials, according to fireplanes.org.

The Taganrog trials were conducted jointly by International Emergency Services, and Beriev, which funded the trials.

The Be-200 can land on water and scoop up 3,000 gallons (12,00 liters) of water into its hull, and can then fly quickly to an affected area and drop its load onto a fire. It can also be reconfigured for search and rescue or passenger flying. Beriev is the world's only maker of large amphibious jet aircraft.

The United States has an urgent need to renew its air tanker fleet as many existing planes in the role are obsolete and coming to the end of their lives. The FAA, the country’s aviation watchdog, recently ordered safety checks on Lockheed Neptune P2V air tankers operated by Neptune Aviation after large cracks were found on a wing spar in one aircraft.