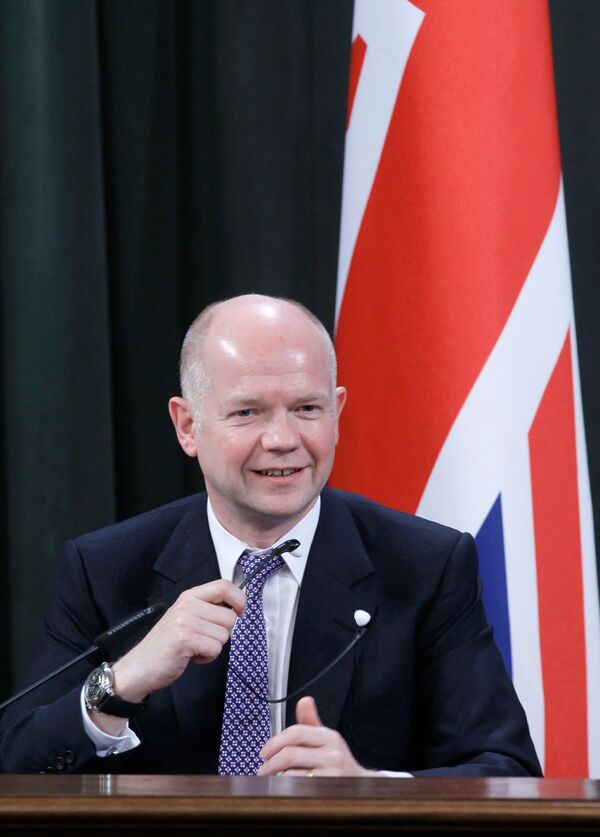 © RIA Novosti . Vitaliy Belousov
/
Go to the photo bank
Subscribe
A Russian cargo ship reported to be carrying arms to Syria has changed its course and is returning home, CNN quoted British Foreign Secretary William Hague as saying on Tuesday.

A Russian cargo ship reported to be carrying arms to Syria has changed its course and is returning home, CNN quoted British Foreign Secretary William Hague as saying on Tuesday.

"I am pleased that the ship that was reported to be carrying arms to Syria has turned back apparently towards Russia," British Foreign Secretary William Hague told the House of Commons. He did not name the vessel, the report said.

Western media reports quoted officials as saying that the Russian operator Femco's cargo ship, MV Alaed, was allegedly carrying a cargo of Mil Mi-25 attack helicopters and coastal-based anti-ship missiles to Syria from Russia’s port of Kaliningrad. The ship was spotted in the North Sea, off the north coast of Scotland.

A British marine insurer, Standard Club, has withdrawn cover from the ship over allegations about its cargo and destination.

Standard Club told RIA Novosti in a statement, "We were made aware of the allegations that the Alaed was carrying munitions destined for Syria… We have already informed the ship owner that their insurance cover ceased automatically in view of the nature of the voyage."

"By mutual agreement, the contract between the ship owner and United Nordic Shipping A/S for the commercial management of the MV Alaed was annulled today, on Monday June 18, without actually coming into force," Femco said in a statement on its website.

In his House of Commons speech, Hague pointed to a European Union arms embargo on Syria, adding that the issue of Russian arms supplies to Damascus had been discussed with Russia, CNN said.

“We discourage anyone else from supplying arms to Syria,” he said.

Standard Club denied that the move was made at the behest of the British government. "There was no pressure at all from the UK government that I am aware of," a company spokesman said.

Britain’s Daily Telegraph says British security officials told Standard Club it would be breaching the EU arms embargo if it provided cover to a ship making weapons deliveries. Without insurance cover, the vessel would be unable to put into port. The Telegraph added that the British government was notified last week by the US government that the insurance was provided by a British insurer.

Russian Foreign Minister Sergei Lavrov denied the claim, saying the helicopters had originally been supplied in the Soviet-era and were being returned to Syria under an existing contract. He also said military equipment being supplied to Syria was defensive in nature and could not be used against civilians.