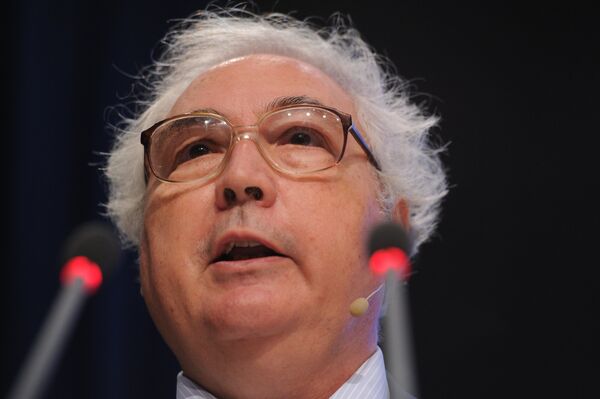 © RIA Novosti . Alexei Filippov
/
Go to the photo bank
Subscribe
The internet and social networks played a key role in popular uprisings across the world suggesting their powerful role in the globalization process, professor and sociologist Manuel Castells said on Tuesday.

The internet and social networks played a key role in popular uprisings across the world suggesting their powerful role in the globalization process, professor and sociologist Manuel Castells said on Tuesday.

As these movements were organized through social networks, they can afford no command control center and any form of leadership as well as no central structure.

Among other common features which unites all protests and uprisings that happened in the last two years, in the Middle East states, in the United States, and in Russia, is that the movements started in the social networks, led to occupying public sites as Wall Street in New York or the monument to Kazakh poet Abai Qunanbaiuli in Moscow to "form some state of autonomy" there, he said

As these movements are local and global at the same time, they, largely spontaneous in all cases, seriously influence public opinions and propose new forms of democracy, Castells added.

"They want to show: what we have [now] does not work, what we have is not democracy. What we could have, they are trying ... to practice it, to create new forms of democracy," the professor said.

"[As] the quality of democracy is now being disputed, only if the institutions all over the world, and in Russia as well, accept to open up for debates with the citizens, only then the democracy will be able to express peaceful demands of the civil society," Castells also said.