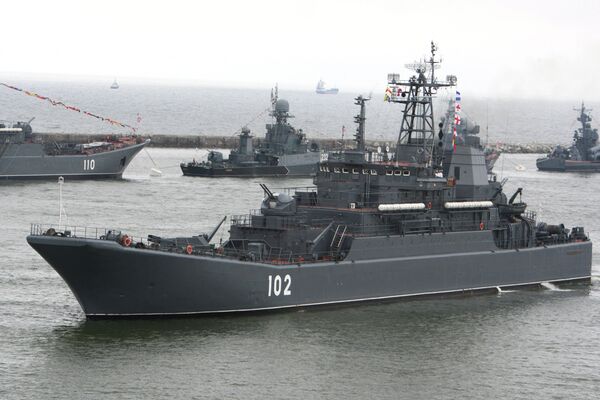 The Russian Defense Ministry denied on Tuesday media reports that it is sending a warship from the Baltic Sea Fleet to Syria and it also dismissed reports of upcoming foreign military exercises in the Middle Eastern country.

The Russian Defense Ministry denied on Tuesday media reports that it is sending a warship from the Baltic Sea Fleet to Syria and it also dismissed reports of upcoming foreign military exercises in the Middle Eastern country.

Media reports said the Kaliningrad, a Ropucha II Class Large Landing Ship, was en route to the Mediterranean and the Syrian port of Tartus.

“The only right thing about these reports is that the Kaliningrad is indeed part of the Baltic Sea Fleet,” a Defense Ministry spokesman said.

“The Kaliningrad is currently taking part in the Celtic Week [festival] and will soon return to its home port,” he said.

“There are no plans for it to participate in any long-range deployments.”

Commenting on reports about large-scale international exercises in Syria with the participation of Russia, the Defense Ministry official dismissed them as an attempt to “further escalate the situation in Syria.”

Earlier in the day Syria denied reports of an upcoming military exercise on its territory with the participation of Russian, Chinese, and Iranian forces. Media reports said the exercise would take place in Syria and in its territorial waters, and that Egypt has allowed 12 Chinese warships to pass through the Suez Canal.

“This information is out of sync with reality,” said Buseina Shaaban, political advisor to the Syrian president. “Nothing could be further from the truth.”

She also dismissed Western media reports that a cargo vessel has left the port of Kaliningrad with a consignment of helicopters and is headed for Syria.

“This information is a provocation and it also has nothing to do with reality,” Shaaban said.

Some Ukrainian media sources reported on Sunday, referring to CNN and other western media, that another large amphibious ship from the Russian Black Sea Fleet, the Nikolai Filchenkov, was heading for the Syrian port of Tartus carrying weapons and marines to defend Russia’s naval facility.

Last week, U.S. Secretary of State Hillary Clinton and U.S. Ambassador to the United Nations Susan Rice lashed out at Russia over its alleged arms supplies to Syria. Moscow strongly rejected the claims, saying that Russia was not “delivering to Syria, or anywhere else, items that could be used against peaceful demonstrators.”

According to UN estimates, about 12,000 people have been killed in Syria since the beginning of a popular uprising against President Assad in March 2011, which started with peaceful protests but has since grown into a low-level civil war.