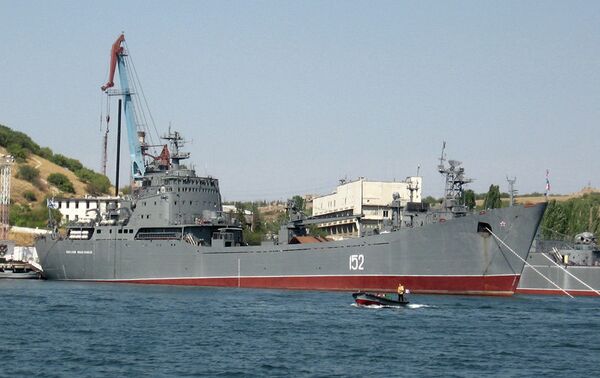 The media reports that a large Russian amphibious ship carrying weapons and troops was en route to Syria are false, a source in the Russian Black Sea Fleet told RIA Novosti on Sunday.

“The ship is in the state of instant readiness for departure like all of the fleet’s warships. There are no marines aboard the ship and there were no commands for a voyage towards Syria. The crews are engaged in day-to-day activities,” the source said.

Some Ukrainian media sources reported on Sunday, referring to CNN and other western media that the Nikolai Filchenkov large amphibious ship from the Russian Black Sea Fleet stationed in the Crimea in Ukraine was heading for the Syrian port of Tartus carrying weapons and marines to defend Russia’s naval facility.

In late May, several Russian and Western media as well as a U.S.-based advocacy group, Human Rights First, reported that the Russian-flagged bulk cargo vessel Professor Katsman docked at the Syrian port of Tartus on May 26, allegedly carrying weapons for the President Bashar Al-Assad’s forces.

Soon after the reports, U.S. Secretary of State Hillary Clinton and the U.S. Ambassador to the United Nations Susan Rice lashed out at Russia over its alleged arms supplies to Syria. Moscow strongly rejected the claims, saying that Russia was not “delivering to Syria, or anywhere else, items that could be used against peaceful demonstrators.”

According to UN estimates, about 10,000 people have been killed in Syria since the beginning of a popular uprising against President Assad in March 2011, which started with peaceful protests but has since grown increasingly militarized.