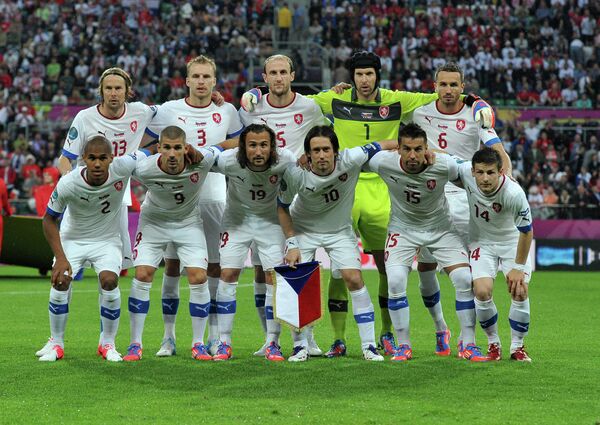 The Czech Republic qualified for the knockout stages of Euro 2012 courtesy of their patience against Poland, Czech coach Michal Bilek said Sunday

The Czech Republic qualified for the knockout stages of Euro 2012 courtesy of their patience against Poland, Czech coach Michal Bilek said Sunday.

Petr Jiracek's second-half strike secured a deserved 1-0 win over the co-hosts, sending the Czechs into the quarterfinals after Group A leader Russia were stunned 1-0 by Greece.

"We knew that Greece scored a goal and I told the players to be patient," Bilek said of his conversation with the players at half time.

"We were able to counterattack because they left their defense open, and one of our breaks brought the goal," he said.

It marks an unlikely turnaround for the Czechs, who began their campaign with a 4-1 trouncing by Russia and a marginal 2-1 victory over Greece.

"We have learned from our mistakes and during the second and third matches we were more responsible in defense," Bilek said.

Bilek spoke of his shock at the Greeks' escape from the group by beating Russia, who many had labeled a dark horse for the title.

"We were surprised by the result of Russia and Greece because Russia could have reached the final, so it's the great surprise of the group. No one imagined [Russia] could not go through to quarterfinals."

"Rosicsky is irreplaceable really but Daniel Kolar played a great match," he said.

The Czechs had outdone themselves, especially considering their slow start, Bilek said.

"The objective was to qualify for the quarterfinals, and we are qualifying from first place, which we didn't expect."

They face the second finisher in Group B, which is currently led by Germany and Denmark.