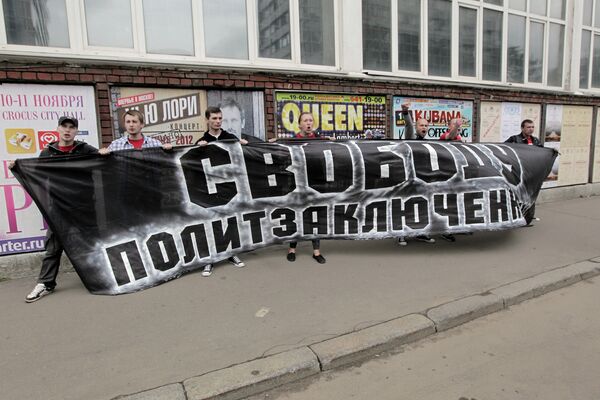 Moscow police detained at least 14 people during an opposition protest outside the headquarters of Russia's top investigative unit.

Moscow police detained at least 14 people during an opposition protest outside the headquarters of Russia's top investigative unit.

Activists were holding banners calling on the Investigative Committee (SK) to release 13 fellow protesters who had been arrested over a demonstration on the eve of President Vladimir Putin's May 7 inauguration for a third term and may face jail terms.

The May 6 rally saw clashes between protesters and police, in the most serious violence since the start of the previously largely peaceful protests against Putin last winter.

Riot police "snatched" the protesters outside the SK building just east of the city center "for no reason," Sergei Udaltsov, the fiery head of the Left Front movement, wrote on his Twitter account.

Udaltsov, who spent 15 days in jail on protest-related charges last month, said activists vowed to gather on the site every Saturday until those held were freed.

The apartments of several opposition figures including Udaltsov were raided by police earlier this week, in what activists said was reminiscent of Soviet-era repression. SK said the searches were connected to a criminal probe of the May 6 demonstration.

The body has been at the center of controversy over the past few days after a Moscow newspaper editor accused SK head Alexander Bastrykin of threatening the life of his deputy. Bastrykin later admitted to having had an "emotional conversation" with Sergei Sokolov, who works for the liberal Novaya Gazeta paper, and made a public apology.