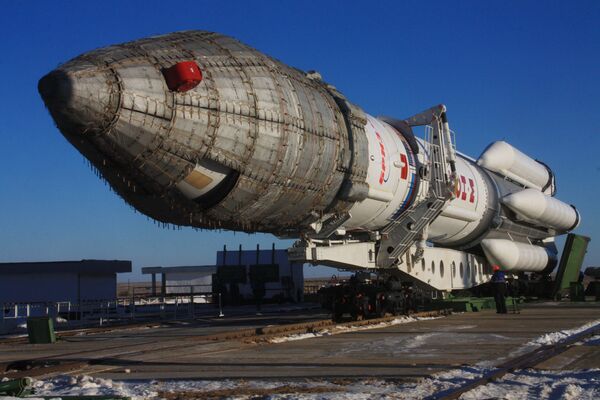 Kazakhstan has given Russia permission to carry out launches from the Baikonur space center, Kazakh Prime Minister Karim Massimov said on Friday.

Kazakhstan has given Russia permission to carry out launches from the Baikonur space center, Kazakh Prime Minister Karim Massimov said on Friday.

Russia and Kazakhstan have failed so far to reach an agreement on a new drop zone for the debris from Russian carrier rockets being launched from the Baikonur space center. The delay has already prevented Russia from launching a European weather monitoring satellite MetOp-B on May 23, and a cluster launch of Belarusian, Canadian, German and two Russian satellites on June 7.

“We agreed that Kazakhstan gives Russia permission for these launched,” Massimov said after talks with Russian Prime Minister Dmitry Medvedev.

Kazakhstan insists that in order for the zone to be used the two sides must sign an additional agreement to the Baikonur rent agreement, which has to be ratified by the Kazakh parliament.

Kazakh space agency Kazcosmos said that the talks on the new agreement began in 2008, but a draft document is still in the works.

After the collapse of the Soviet Union Baikonur, built in the 1950s, was leased by Russia from Kazakhstan for $115 million per year in rent to Astana until 2050. Russia, which also annually spends $50 million to maintain the space center’s facilities, intends to gradually withdraw from Baikonur and conduct launches from the Plesetsk Cosmodrome in the Arkhangelsk Region and to complete construction of the Vostochny space center in the Far East.