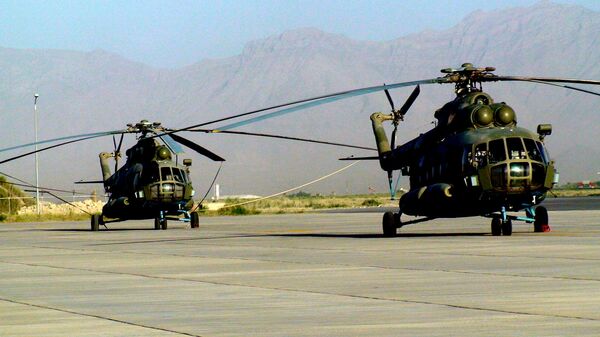 The Pentagon is buying ten more Mi-17 helicopters for the Afghan military from Russia's state-run weapons broker Rosoboronexport, the company confirmed on Thursday.

"I can confirm to you that we have indeed been approached by the U.S. Defense Department about the purchase of ten Mi-17s," Rosoboronexport spokesman Vyacheslav Davidenko told RIA Novosti.

Davidenko declined to disclose the value of purchase, but Rosoboronexport signed a $367.5 million deal with the United States in May 2011 for delivery of 21 Mi-17V5s.

The latest sale is the option part of the 2011 U.S. Army contract with the Moscow-based defense equipment holding, for twelve more helicopters.

The Pentagon is also reported to have bought two Mi-17s earlier this year.

The total value of the deal including engineering services and spare parts could be around $900 million, according to U.S. officials.

The Pentagon has been under pressure over its dealings with the company after U.S. Senator John Cornyn accused the firm of selling arms to the government of Syrian President Bashar al-Assad.

Senator Cornyn sent a letter to Defense Secretary Leon Panetta earlier this week calling Rosoboronexport "an enabler of mass murder in Syria" and called for sanctions against the company.

Pentagon spokesman George Little said Washington "understood" Cornyn's concerns, but said the helicopters involved were the best option to allow Afghan forces to "take on their own fights inside their own country."

Rosoboronexport was subject to U.S. sanctions from 2006 to 2010 over its arms sales to nations including Iran and Syria.

Pentagon spokesman George Little said has confirmed that Syrian government forces were using "helicopter gunships against their own people," but added that he was not aware of a new shipment of attack helicopters from Russia to Syria.

Syria is one of Russia's major weapons clients, and Moscow has opposed proposals for an arms embargo on Damascus, saying this would give rebel forces an unfair advantage in the conflict.