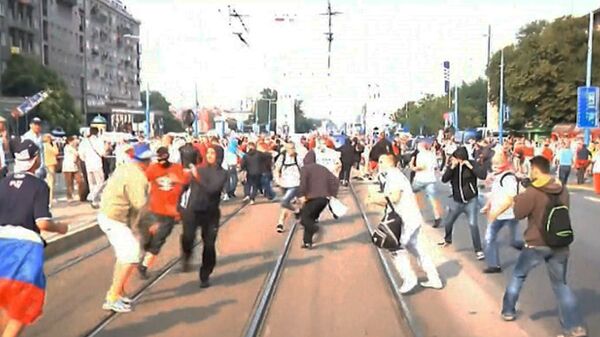 © RIA Novosti
Subscribe
Fifty-six people have been arrested after violence flared at a march of Russian fans in the Polish capital Warsaw, Warsaw police told R-Sport on Tuesday.

Fifty-six people have been arrested after violence flared at a march of Russian fans in the Polish capital Warsaw, Warsaw police told R-Sport on Tuesday.

The violence broke out during a march of 5,500 Russian fans through the city ahead of tonight's Euro 2012 match between the two nations at Warsaw's National Stadium.

Police fired warning shots into the air after coming under attack from Polish fans, some of whom had intercepted the Russian column.

"The police arrested now 56 persons belonging to the two teams, from Poland and from Russia," spokeswoman Agnieszka Hamelusz said.

"We are trying to look for the others who were fighting during this march."

It is not yet clear how many of them are Russians and how many are Polish, she said.

One Russian and one Pole were seen being carried off for treatment by police. Hamelusz said that the police was waiting for information on injuries.

Warning shots were fired when Polish fans hurled bottles, stones and flares at police, who also deployed a water cannon.

At least one Polish fan was arrested after infiltrating the Russian parade and shouting inflammatory slogans.

Alexander Shprygin, head of the All-Russian Fans’ Union, was with the Russian fans and told R-Sport that Polish fans had thrown pyrotechnics at the Russians.

Nikolai Komarov, a spokesman for the Russian Football Union, refused to comment when contacted by R-Sport, saying he was with the Russian team in their hotel in the city center.

The scuffles follow trouble on Friday when some Russian fans assaulted Polish stewards after Russia's 4-1 win over the Czech Republic in Wroclaw.