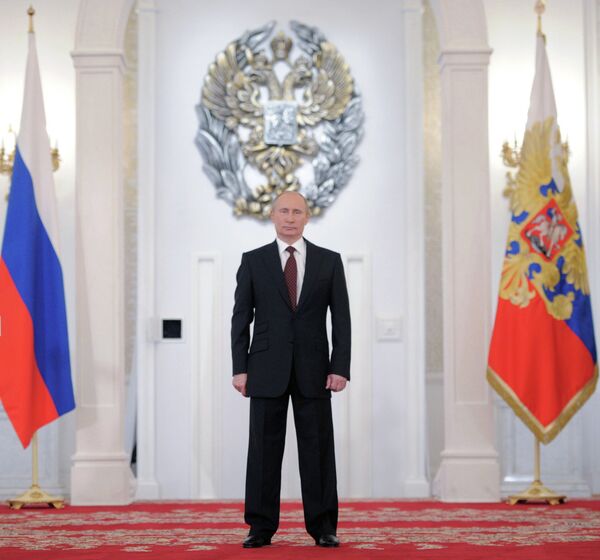 © RIA Novosti . Alexey Druzhinin
/
Go to the mediabank
Subscribe
International
India
Africa
Russian President Vladimir Putin called for compromise between the political forces in the country in a speech on Tuesday, as his opponents staged a mass anti-Kremlin rally in Moscow.

Russian President Vladimir Putin called for compromise between the political forces in the country in a speech on Tuesday, as his opponents staged a mass anti-Kremlin rally in Moscow.

“Various ideas are now voiced about Russia’s present and future, [but] these heated debates are normal for a democratic country,” Putin said in Moscow.

“It’s important that we hear and respect each other, strive for mutual understanding and look for compromise,” Putin said at an event to celebrate Russia Day, a national holiday.

The country’s political system is undergoing a major upheaval which will require the authorities to be in constant dialogue with the populace, Putin said.

The Kremlin has made minor moves to liberalize Russia's political system this year by restoring direct gubernatorial elections and easing registration for political parties. That followed mass political protests in Moscow in December, attracting tens of thousands to street rallies in the biggest sign of political dissent in two decades.

But critics have accused Putin’s government of rolling back political reform and cracking down on the opposition by hamstringing the new governors election law, as well as tightening rules for protest rallies ahead of the mass protest in Moscow on Tuesday. Opposition leaders’ homes were searched by investigators on the eve of the rally, the first since May, when protesters clashed with police and hundreds were arrested.