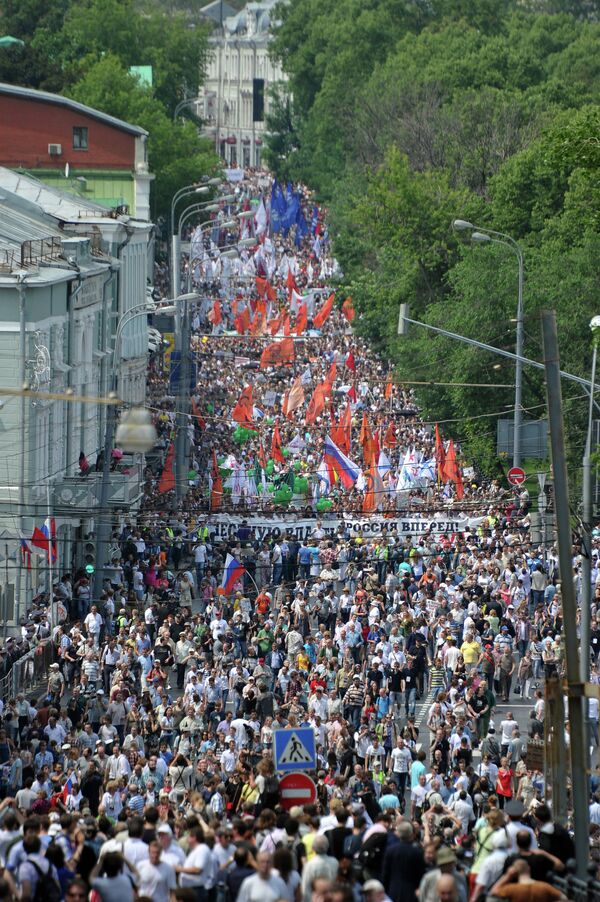 © RIA Novosti . Alexandr Vilf
/
Go to the mediabank
Subscribe
International
India
Africa
Political activists gathered in downtown Moscow on the Russia Day public holiday on Tuesday, braving rain showers for an anti-Kremlin rally as its organizers were called in for questioning during the event.

Tens of thousands gathered in downtown Moscow in the pouring rain on Russia Day on Tuesday for a mass anti-Kremlin rally, the first after legislation on rallies was radically tightened by the government.

Meanwhile, President Vladimir Putin, accused before the rally of preparing a crackdown on the opposition, urged political forces in the country for dialogue and proposed compromise in a speech on Tuesday.

The March of Millions, which was approved by the authorities for up to 50,000 participants, saw the protesters march along downtown boulevards and a stop for a concert and a round of speeches from opposition figures.

The red flags of the Communists predominated with plenty of nationalists also in attendance, according to a RIA Novosti correspondent on the scene. A helicopter circled above.

"While we are united, we can never be defeated," chanted a crowd composed of hardline Communists, liberal democrats and nationalists, summing up neatly for one brief moment the disparate nature of the anti-Putin movement.

"They will not scare us!" chanted protesters at the first demostration since a dramatic increase in fines for protest-related offences, introduced by a bill signed into law by Putin last Friday.

Some 12,000 police officers were deployed throughout Moscow on Tuesday, police said earlier.

Udaltsov voiced the rally’s formal demands, including a new reform of political legislation, release of alleged “political prisoners,” access to federal television channels for protesters and, most importantly, snap presidential and parliamentary elections.

He also said the protesters demand social reforms, including hikes of pensions and wages. The proposals were met with general, but not overly loud cheer from the crowd.

A new rally will take place in the fall, possibly on October 7, Udaltsov said. The day is Vladimir Putin's 60th birthday. Meanwhile, the opposition should continue permanent protests in the streets of Moscow, where activists attempted to set up camps in recent weeks, Udaltsov said.

The rally wrapped up without any arrests, city police said. A rainstorm hit downtown Moscow as soon as the event ended, dispersing most people ahead of a rock concert that was to follow the political speeches.

“But I hope for peaceful change because a revolution will be disaster for Russia,” he added.

Putin said the same day that he proposed dialogue on Russia’s present and future between all political forces in the country, calling such debates a norm for a democratic society.

“It’s important that we hear and respect each other, strive for mutual understanding and look for compromise,” Putin said at an event to celebrate Russia Day, a national holiday.

His spokesman Dmitry Peskov praised both police and rally organizers in a separate statement, saying the peaceful event indicates “growth of political culture” in the country.

The Tuesday rally is the first of its kind since a May 6 event on Bolotnaya Square, which ended with protesters clashing with police and some 650 arrests, according to rights activists. Police put the figure of arrests at around 400.

Thirteen people were later held on charges of starting the riots, and the homes of opposition leaders, including Alexei Navalny, Sergei Udaltsov, Ilya Yashin and Ksenia Sobchak, were searched on Monday in connection with the case.

The protest leaders were also summoned for questioning at 11 a.m. on June 12, an hour before the start of the rally.

Navalny, Yashin and Sobchak obeyed the summons, telling reporters they hoped to make it in time for the round of speeches, set to start at 3 p.m.

Udaltsov opted to go to the rally instead, his lawyers formally requesting the investigators to reschedule the meeting. He led the crowd in chanting “Revolution!” at the start of the march.

The opposition leaders are only witnesses in the ongoing check, an Investigative Committee spokesman said on Tuesday. He added that Udaltsov would not face any sanctions over skipping the questioning.

Investigators insisted the searches were legal, but opposition leaders said the move was an attempt at political pressure ahead of the rally.

Tensions have mounted in the country after the clashes in May, with police cracking down several times on camps that protesters tried to pitch in the capital’s center.

A bill has been fast-tracked through the federal legislature recently, tightening rules for staging public events and hiking fines for violations of public order at rallies from 1,000 rubles ($30) to 300,000 rubles ($9,000).

In Astrakhan in the country's south, police detained prominent opposition leader and mayoral hopeful Oleg Shein, saying he and his supporters attempted to stage an unsanctioned rally during Russia Day festivities.