Russian Opposition Leaders Appear for Questioning Ahead of Anti-Putin Rally 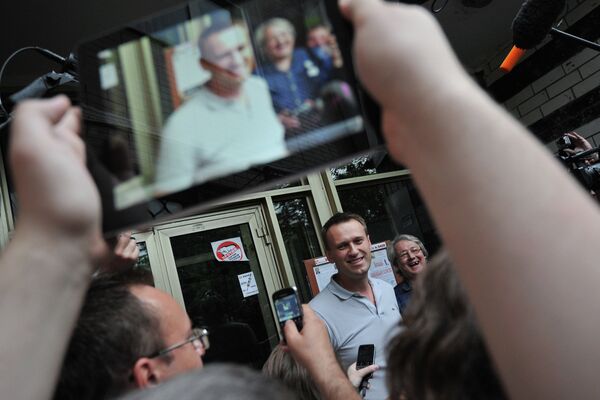 © RIA Novosti . Ramil Sitdikov
/
Go to the mediabank
Subscribe
International
India
Africa
Russian opposition leaders who were summoned by Russia’s Investigative Committee as part of a probe into the May 6 riots have appeared for questioning, a police source said on Tuesday.

Russian opposition leaders who were summoned by Russia’s Investigative Committee as part of a probe into the May 6 riots have appeared for questioning, a police source said on Tuesday.

The homes of Russian opposition figures anti-corruption blogger Alexei Navalny, Left Front leader Sergei Udaltsov, Solidarity movement head Ilya Yashin and TV star and socialite-turned-opposition activist Ksenia Sobchak were searched by police on Monday as part of probe into the May 6 rally that turned into violent clashes between protesters and police.

Investigators said the searches were legal while critics accused authorities of cracking down on Russian protest movement leaders.

Three of the protest leaders appeared before investigators an hour before the demonstration in downtown Moscow, in protest against the rule of President Vladimir Putin, which the authorities have permitted 50,000 people to  attend.

Udaltsov opted to go to the rally instead, his lawyers formally requesting the investigators to reschedule the meeting. He led the crowd in chanting “Revolution!” at the start of the march.

Over 400 people were arrested and scores injured after a May 6 rally against Putin’s rule turned violent when protesters briefly broke through police lines in a bid to take their protest to the Kremlin walls. Putin’s opponents accuse him of corruption and curtailing political freedom, though the government denies its laws on public demonstrations are more excessive than those used in Europe.