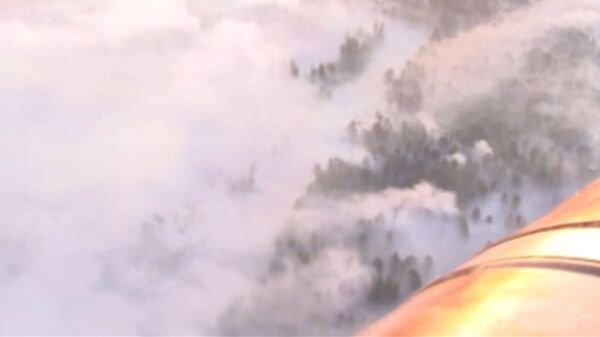 So far, helicopters have made five drops of water and one drop each have been made by Il-76 and Be-200 waterbomber aircraft, according to the Volga Region Emergencies Ministry.

“The explosions at the arsenal have practically stopped," the local military district press office said early on Tuesday afternoon. "The site is smouldering, and only the packaging and paper from the shells is actually on fire. There is not danger to the nearby settlements.”

One person was wounded and two are still missing after the site caught fire on Monday at 3.15 p.m. Moscow time, triggering a series of explosions, the Russian Defense Ministry said.

“One serviceman received a minor shrapnel injury and was hospitalized. His life and health are not in danger,” a Defense Ministry spokesman said.

Twenty six staff from the depot were evacuated, the regional government said.

Around seven hundred residents from several villages were nearby also evacuated, local police said. Three were injured. Previously, it was reported that three hundred had been evacuated.

“Four villages in Orenburg region and four in Samara region are to be evacuated,” the Emergencies Ministry said.

Over 750 people are working at the site to contain the fires, the ministry said.

The incident is the latest in a string of fires and explosions at munitions storage and disposal sites in Russia this year.

Three servicemen were injured in a blast that rocked a military range in Russia’s Far East Khabarovsk Territory on May 30.

On May 18, one person was injured in an ammunition depot fire in the nearby Primorsk Territory.