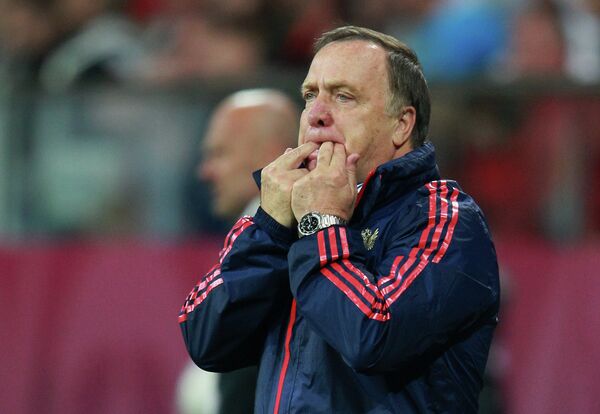 Russia coach Dick Advocaat said Monday that he is not planning to make significant changes in the starting eleven for Tuesday's Group A clash with co-hosts Poland.

Russia coach Dick Advocaat said Monday that he is not planning to make significant changes in the starting eleven for Tuesday's Group A clash with co-hosts Poland.

Two goals from Alan Dzagoev and a late spectacular strike from second-half substitute Roman Pavlyuchenko helped Russia to top the group with a 4-1 dismantling of the Czech Republic on Friday.

The Poles drew 1-1 against Greece in a match where both sides finished with 10 men.

Reacting to Polish coach Franciszek Smuda, who said his opponents were unlikely to tamper with a winning lineup, Advocaat said: "The only thing I can say is that there is not much reason to make big changes."

The side included seven players from Zenit St. Petersburg, who reached the Champions League knockout stage this past season.

"They played together for a couple of years, they are successful at a European level, so that helps," Advocaat said.

Russia is going to play attacking football, but does not expect Poland to sit back and soak it up, Advocaat added.

"The first 25 minutes against Greece, Poland were very attacking and very organized and they could have been two or three up. ... Then it stopped working for them and I cannot really say a lot more."

A victory over Poland would secure Russia a place in the quarterfinals against Germany, Netherlands, Portugal or Denmark.