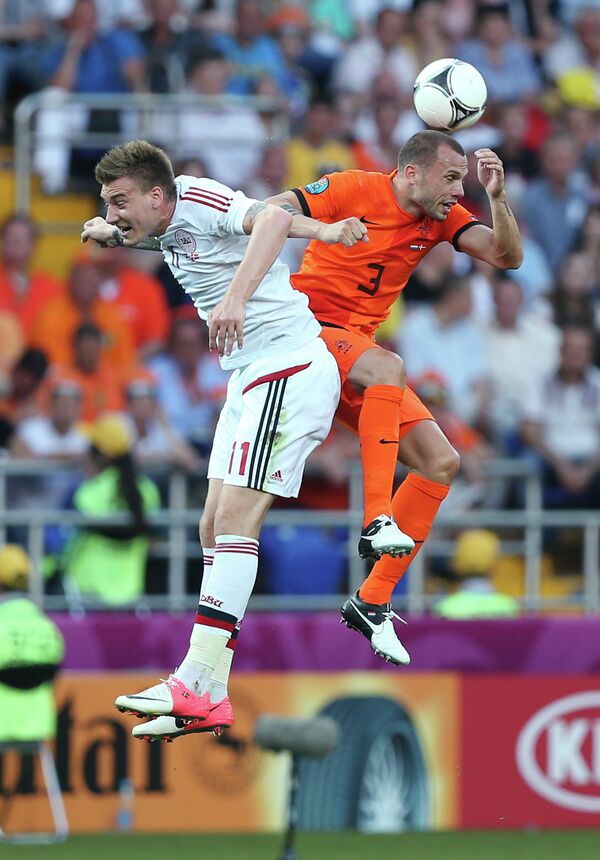 A first-half goal by Michael Krohn-Dehli allowed Denmark to pull off the first shock result of Euro 2012 with a 1-0 win over a wasteful Netherlands side in Kharkiv on Saturday.

A first-half goal by Michael Krohn-Dehli allowed Denmark to pull off the first shock result of Euro 2012 with a 1-0 win over a wasteful Netherlands side in Kharkiv on Saturday.

On a rare Danish counterattack, midfielder Krohn-Dehli picked up the ball in the penalty area on 24 minutes and rolled it past the Dutch defense before sending the ball between the legs of goalkeeper Maarten Stekelenburg.

The Netherlands spurned a series of good chances, with Arjen Robben hitting the post.

Scoring the winner was all the sweeter for Krohn-Dehli because he used to live in the Netherlands, he said.

Tactics were the key to Denmark's resistance, according to coach Morten Olsen.

"We have a good position play, the most important is that we trusted ourway of playing football, it is especially important against the team that likes to dominate," he said in televised comments.

The Dutch were afflicted by their own poor finishing and some poor refereeing, coach Bert van Marwijk claimed.

"There were five, six players that missed a lot of chances and the referee missed a chance of giving us a penalty," he said.

Denmark started brightly, with Daniel Agger's header forcing a save from Stekelenburg after a free-kick on two minutes.

Dutch left-back Jetro Willems, 18, whose start made him the youngest player in European championship history, responded soon afterwards with a long shot that missed the target, as did a spectacular scissors kick from Ibrahim Afellay.

The Dutch pressure continued, as did their wayward finishing, with Robin van Persie blasting a powerful effort wide on seven minutes.

Nine minutes later, it was Arjen Robben's turn to test Danish goalkeeper Stephan Andersen with a speculative shot, and he set up van Persie five minutes later, only for the Arsenal forward to miss the target.

After Krohn-Dehli opened the scoring, Denmark briefly pushed for a second as the Dutch defense strained to keep them at bay.

Robben missed a glorious chance just before half time, the ball hitting the post after he seized on an error from Andersen, before Afellay fired high.

The Dutch unleashed an onslaught early in the second half but Andersen stood firm, saving shots from Robin van Persie and then Mark van Bommel.

Denmark mounted a rare attack in 55 minutes, but no one was able to make contact with Simon Poulsen's promising cross.

Robben missed a header before substitute Klaas-Jan Huntelaar missed a one-on-one chance to score on 74 minutes.

Huntelaar's attempt to play the ball over Andersen failed, and the Danish goalkeeper was clattered as he pushed the ball away from van Persie, who was trying to follow up on the rebound.

The Dutch finishing disease continued into stoppage time, with John Heitinga missing a header and van Persie blazing the ball over the bar.

In the next round of games in Group B on Wednesday, the Danes can secure a place in the quarterfinals by beating Portugal, while the Netherlands face Germany.