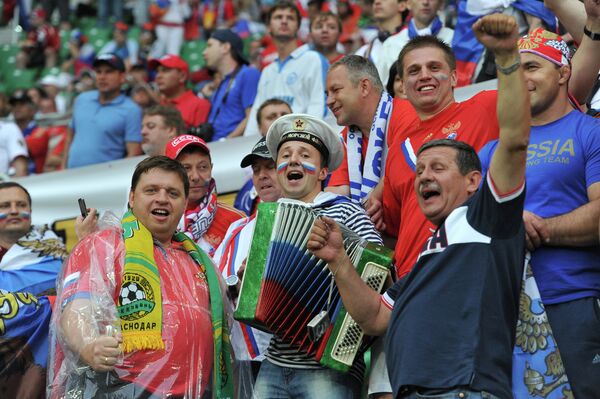 The leader of Russia's official fan club has boasted that Russian supporters gave Euro 2012 stewards "a kicking" in a stadium brawl after their opening match, in comments to R-Sport on Saturday.

The leader of Russia's official fan club has boasted that Russian supporters gave Euro 2012 stewards "a kicking" in a stadium brawl after their opening match, in comments to R-Sport on Saturday.

“When they tried to detain one person in a heavy-handed manner, well, of course they were given a kicking,” Alexander Shprygin, head of the All-Russian Fans’ Union, said.

“No one was detained, no one was arrested, the stewards weren’t injured.”

Shprygin spoke after video emerged appearing to show a crowd of Russian fans punching and kicking stewards in a passageway in the stadium.

Shprygin’s organization has close ties to the Russian Football Union, the country’s football governing body, and is often given tickets for international games to distribute to fans.

A Russian supporter had thrown a flare earlier, and the trouble started when stewards tried to detain the culprit as fans left the stadium, Shprygin said.

“During the match, one of the fans threw a pyrotechnic device onto the pitch. At the exit, a steward came up and tried to detain, in a heavy-handed manner, not the one who had thrown it, but just someone standing nearby.”

When asked what the "heavy-handed" behavior consisted of, he said: “He came up, grabbed [the fan] on the shoulder and said: ‘Hey you, you’re coming with me.’”

The Russian Football Union refused to comment on the incident when contacted by R-Sport.

Scuffles also broke out overnight between Russian and Ukrainian supporters in the Ukrainian city of Lviv.

Russia’s next match is against Poland in Warsaw on Tuesday, Russia’s national day.

A group of fans including Shprygin are planning a patriotic march before the game, which has been welcomed by Polish Prime Minister Donald Tusk, although Warsaw mayor Hanna Gronkiewicz-Waltz has warned it could give rise to “unhealthy emotions”.