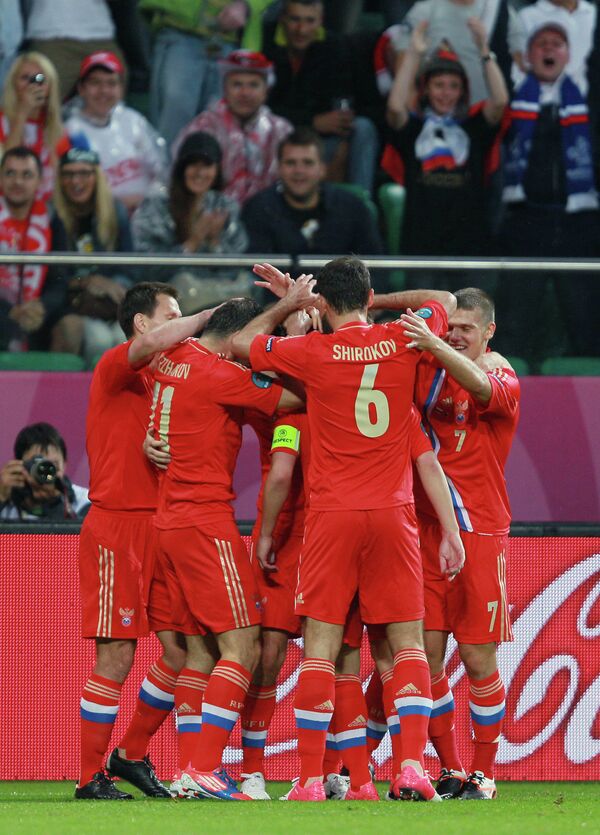 Two goals from Alan Dzagoev and a late stunner from Roman Pavlyuchenko helped Russia throw down a marker at Euro 2012 on Friday with a 4-1 dismantling of the Czech Republic.

With co-hosts Poland drawing 1-1 with Greece in the tournament curtain-raiser earlier Friday, the Russians shoot to the top of Group A and become the team to beat.

CSKA Moscow midfielder Dzagoev, 21, put the Russians ahead on 15 minutes, smashing home a rebound off the post from an Alexander Kerzhakov header.

The second came less than ten minutes later as midfielder Roman Shirokov chipped deftly over Petr Cech after a through ball from Andrei Arshavin.

The Czechs pulled one back early in the second half through Wolfsburg striker Vaclav Pilar, who calmly rounded Vyacheslav Malafeev and slot home from a tight angle.

Roman Pavlyuchenko came on for Alexander Kerzhakov on 75 minutes, and the former Tottenham man immediately set up Dzagoev for his second before firing in a stunning fourth for his team a minute later.

It was a performance on a parallel with Russia's victory over the Netherlands at Euro 2008, and hails the arrival on the international scene of CSKA Moscow's Dzagoev, who has for years been mooted as a star of the future.

Russia started poorly, looking unsteady in possession and uncertain without the ball.

Malafeev punched away an early cross as the Czechs looked brighter in the opening stages.

Defender Roman Hubnik headed over from 18 yards on six minutes, before Tomas Rosicky lashed wide as the Russians looked overwhelmed in midfield.

But it was only temporary. They hit back on 14 minutes as Kerzhakov drilled wide after good build-up play from Andrei Arshavin and Yuri Zhirkov down the left.

It was a fitting prelude to the goal a minute later, which came after Konstantin Zyryanov floated an inch-perfect pass to Kerzhakov, whose header crashed against the post for the CSKA man Dzagoev to hit home.

The goal transformed the game, as Russia loosened up and began to dictate the play.

Dzagoev missed a glorious chance to put Russia two up, skewing wide after an incisive passing move ended with Kerzhakov putting him through.

The Czechs caused problems soon after however, as a cross from Vaclav Pilar forced Zhirkov to head over with Jan Rezek breathing down his collar.

Rezek glanced a header from the resulting corner into Malafeev's arms.

Arshavin then darted down the right to power a low ball across goal that beat everyone.

Kerzhakov should have put the Russians three up with barely half an hour gone, but he blasted over falling back.

Pilar drove a header into the turf that bounced at a nice height for Malafeev to see the half out.

Russia came out with no less confidence, Kerzhakov slicing wide from another flowing move, but they had the wind knocked out of them seconds later.

Jaroslav Plasil, with acres of room in the center, played a straight through ball for Pilar tp keep his composure and reduce the deficit.

The Russians seemed fazed by the Czech goal, reverting from a short passing game to long balls and speculative shots.

Shirokov lashed over before Zyryanov repeated the feat.

Kerzhakov wound a shot just left of Cech's post, before he nipped past Hubnik to strike wide the other side.

The Zenit St. Petersburg striker skewed it a third time seconds later, turning inside Kadlec and before letting loose a left-footed drive that shanked off the outside of his boot.

Czech right-back Theodor Gebre Selassie volleyed a spectacular effort just over from the right side of the box at the other end.

Tomas Rosicky tested Malafeev on 75 minutes, hitting a fierce drive low to his right, but the goalkeeper got a hand down fast to parry and scooped up the loose ball.

Zhirkov had a shot blocked by Hubnik as Russia began to press again, and the third breakthrough followed when Advocaat brought on Roman Pavlyuchenko for Kerzhakov.

The former Tottenham Hotspur forward fed Dzagoev, who put his laces through the ball to power it beyond Cech from the edge of the area.

Pavlyuchenko rounded off Russia's night in style, taking the ball on the left edge of the area, skipping past Hubnik and slamming into the roof of the net.

The Czechs probed for a late consolation that never came.

Russia's next game is Tuesday against Poland in Warsaw, while the Czechs face Greece.