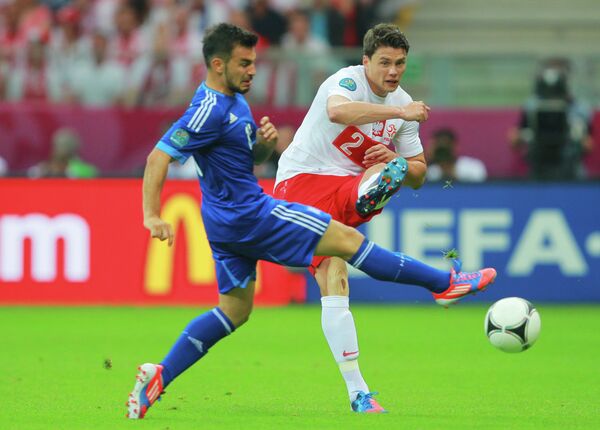 “We came to win this game. We did everything to do so, so we can’t be satisfied that we didn’t achieve our goal,” he said.

"If we leave aside the first 20 minutes, during which we did all the things we were not supposed to do, I am satisfied with all my players."

Murawski registered the first shot on target of the tournament with a speculative effort on four minutes, but saw his shot tipped over by Chalkias.

Greece had few chances in the first half, and one of them came on 11 minutes when Theofanis Gekas outjumped Poland’s Eugen Polanski at an indirect free-kick, but his header flashed wide of the goal. Seconds later, Jakub Blaszczykowski blazed over the bar.

Before Lewandowski opened the scoring from his Borussia Dortmund teammate Blaszczykowski’s right-wing cross on 17 minutes, Greece had twice come close to conceding after Poland charged down the right flank.

Blaszczykowski had blazed over the bar from a low cross on 12 minutes, before Lukasz Piszczek found acres of space behind Greek left-back Jose Holebas two minutes later and swung in a curling cross that brushed Lewandowski’s hair as he failed to make contact.

Greece failed to create many chances for an equalizer, and Euro 2004 winner Kostas Karagounis’ long-range effort was their biggest threat as they failed to make use of a sequence of attacking set-pieces.

On 37 minutes, Damien Perquis spurned a good chance to extend the hosts’ lead when he picked up substitute Kyriakos Papadopoulos’ fumbled clearance ten yards out, but the Polish defender skewed his shot wide of Chalkias’ left post.

Papastathopoulos’ sending-off on 44 minutes provoked strong protests from the Greeks, who had claimed both of his bookings were harshly awarded.

Tempers then threatened to boil over when the Greeks believed Perquis had handled the ball in the Polish box, and Holebas was booked for his enthusiastic appeals.

Lewandowski made an early statement of intent for Poland in the second half, firing over the bar from a wide angle, but this was soon forgotten as Salpingidis seized on Szczesny’s error to level the scores.

Celtic’s Giorgios Samaras had a good chance to score when he was supplied by a lobbed pass from midfielder on 63 minutes, but he failed to control the ball and shot wide.

After Szczesny’s red card, Greece pushed forward and dominated possession, but were unable to carve out a clear-cut chance.

Samaras shot very high of the target from the edge of box on 80 minutes, before Robert Lewandowski hit the side netting on the volley five minutes later to end one of Poland’s increasingly rare attacks.

Both sides were more careful in the closing minutes, although Kostas Katsouranis came close to conceding an own goal with a wild clearance.