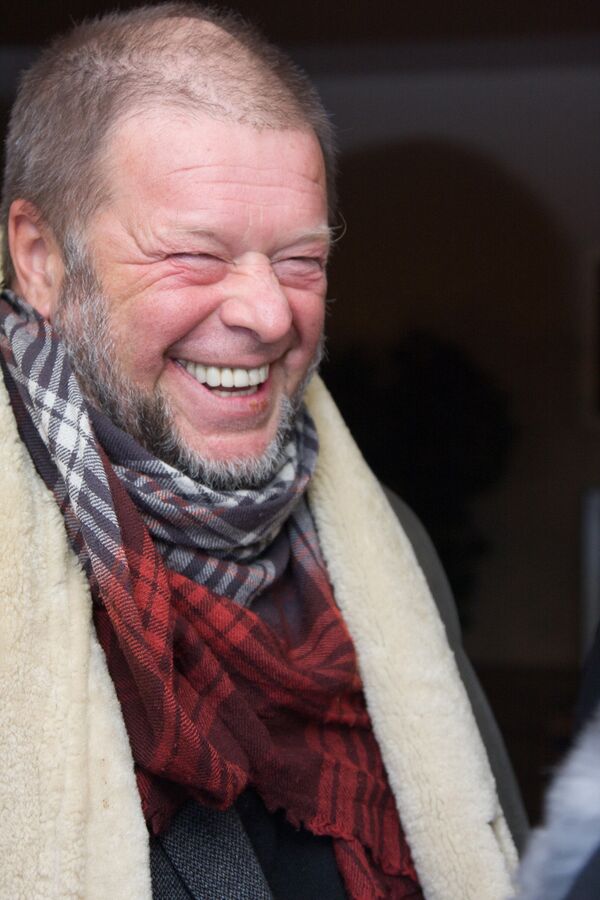 His music may have been outlawed by the pre-perestroika Soviet authorities, but Boris Grebenshchikov, lead singer and sole constant member of Russia’s legendary folk-rock group Akvarium, insists he was never against the socialist system that did its best to stop his recordings finding their public.

His music may have been outlawed by the pre-perestroika Soviet authorities, but Boris Grebenshchikov, lead singer and sole constant member of Russia’s legendary folk-rock group Akvarium, insists he was never against the socialist system that did its best to stop his recordings finding their public.

“To be against something, you have to be on the same level as it,” Grebenshchikov, 58, smiles from behind dark glasses. “But I was outside of it – I didn’t care. I just knew you don’t ever trust the authorities or anyone with the mark of authority.”

“Like Bob Marley said, ‘Babylon,’” he adds, the first of many references to the Rastafarian byword for evil, oppressive authority. “If you don’t trust Babylon, you don’t deal with it.”

Grebenshchikov is speaking ahead of a concert in the central Russian city of Kostroma, part of a tour to celebrate the moment forty years ago this summer when, after wandering the streets of his hometown Leningrad for over 48 hours, he finally came up with a name for his fledgling band.

As the Soviet Union lurched towards its seventh and final decade of existence, Akvarium would become a crucial part of the underground rock scene that sprang up from seemingly nowhere in Leningrad, the cradle of the Bolshevik Revolution, but also the spiritual home of the country’s intellectual and artistic heritage.

But with their Western-influenced sounds and lyrics that betrayed an instinctive distrust of the official Marxist-Leninist ideology, the bands involved in the scene found it almost impossible to put on concerts, let alone get access to recording studios. Until the blooming in the late 1980s of Soviet leader Mikhail Gorbachev’s reforms, groups like Akvarium mainly performed acoustic gigs in communal apartments, their songs circulated on low quality illicit recordings.

“Recording our music back then was improbable and impossible,” Grebenshchikov says. “And we would often turn up for a gig to find that the police had already encircled the venue.”

But Grebenshchikov, known affectionately as BG to his fans and often lazily referred to as “Russia’s Bob Dylan” by critics, dismisses suggestions that he and his fellow musicians were inspired or even encouraged by the knowledge that the authorities saw them as a threat. “It was,” he frowns, remembering the obstacles placed in his group’s path, “just insulting.”

Faced with official hostility, it took Akvarium nine years to manage to record what would become the Soviet Union’s first rock album with more or less decent audio quality – 1981’s “Blue Album” - when a local sound engineer miraculously managed to smuggle the group into a studio.

Although there was no prospect of an official release for the album, the songs on it represented the start of what Grebenshchikov says was a deliberate effort to create a domestic music scene that would provide an alternative to the Soviet Union’s safe, state-sanctioned stars.

“I looked around and saw the ignorance that was beyond belief and all these people listening to rubbish on the radio when they could have been listening to good music,” he recalls.

The son of two Leningrad engineers, Grebenshchikov realized at an early age that music could be his “way out” of the stifling Soviet system, trading illegal recordings of Western rock with friends and acquaintances and attempting desperately to decipher exactly what John Lennon, Mick Jagger and others were singing about.

“I discovered music, the Beatles, and I thought, yeah, this is me,” he says. “After this, I did anything I could to survive, to get my music recorded.”

The Leningrad rock scene of the 1980s was like nothing the Soviet Union had ever seen, as groups like Akvarium and the equally as popular Kino reached out to an audience hungry for a music that would genuinely speak to them about their lives.

But the scene was, Grebenshchikov also reveals, fuelled in part by a most un-Soviet appetite for drug experimentation. The image is a startling one. If it’s easy to picture, say, Jimi Hendrix dropping acid at a sun-kissed California music festival, it’s somehow a lot harder to imagine his Soviet counterparts tripping through the no-nonsense streets of the city that bore that the name of Vladimir Lenin.

“Most people I knew back then, without naming names, took anything they could get their hands on, with the exception of heroin,” he says. “Acid was, and is, a big influence.”

After years as cultural outcasts, the onset of Gorbachev’s perestroika and glasnost saw Akvarium and Kino granted permission to tour the Soviet Union and even release their music on the state record label, Melodiya.

Their success also saw Grebenshchikov leave his Soviet homeland for the first time to record an English-language album with Dave Stewart of the British group the Eurythmics, then one of the world’s most sought-after producers.

“Did I enjoy it?” he laughs. “Well, imagine a 15-year-old with a huge libido in the dressing room of a modeling agency. That’s what it was like. I loved it. I was no one and no one knew me and then all of a sudden I was talking to [David] Bowie, [Iggy] Pop and Debbie Harry.”

But Grebenshchikov’s attempt to make it in the West received a mixed reception, as his songs struggled to make the same impact on a non-Soviet audience and disappointed domestic critics with their diversion from the usual Akvarium sound.

And by the time he returned to Leningrad, the Soviet system that he had spent all his life in was about to finally implode.

The years prior to the collapse of the Soviet Union would see the deaths of two of the country’s biggest rock stars, as Kino’s Viktor Tsoi perished in a car crash in Latvia and the maverick Siberian singer-songwriter Alexander Bashlachyov  fell to his death in unclear circumstances in Leningrad.

The question of how both musicians would have adapted to life in the newly independent Russia is one of the great “what ifs?” of the country’s music scene, but for Grebenshchikov, the answer is simple.

“There is, of course, no if, but judging by us, Tsoi would have just continued to play, to get better, to discover things,” he shrugs.

The years since the break-up of the world’s first socialist state have seen Grebenshchikov immerse himself in an ongoing study of Buddhism and Hinduism, but he is reluctant to define his religious or spiritual beliefs.

“I’ve translated a lot of Buddhist texts,” he says. “And I have a lot of Tibetan lamas as friends. But all religions are talking about the same thing, whatever they might call god. So let’s leave the empty shell of names behind.”

At the concert later that evening, Grebenshchikov performs in front of an image of the Hindu god Shiva. But it’s unclear to what extent his audience of hip local youths and middle-aged office managers “gets” the references to world religions and “Babylon.” Tellingly, perhaps, the most popular song of the entire evening is “Stakani” – “Glasses” an atypical Akvarium track that is a mock Irish jig about the joys of drinking.

Grebenshchikov’s belief that “you don’t deal with Babylon” has, to the surprise of many who saw him as a key figure in the struggle for the hearts and souls of Soviet youth, kept him away from the current wave of protests against the 12-year-rule of Vladimir Putin. Unlike Russian rock legend Yury Shevchuk, whose performance at a snowy downtown Moscow rally late last year was one of the lasting images of the protest movement, Grebenshchikov has shown no inclination to strum his guitar at the Kremlin’s walls.

That’s not to say, however, that the man whose music once saw him kicked out of the Soviet Komsomol youth movement  is indifferent to the roots of the discontent.

“My friend [novelist] Boris Akunin is one of the most well-known protesters,” he says. “And I know exactly why they are doing this – they cannot stand the injustice and the fact that we are being taken for a ride.”

“But, excuse me, I was born with this knowledge, we always have been, all over the world, taken for a ride. I don’t want to sound cynical, but we still don’t know who shot Kennedy.”

“I don’t trust Babylon, so why should I waste my time fighting against it?” he adds. “Just jump off the ship and leave it behind.”

One of the more intriguing rumors doing the rounds of the Russian music scene is of Grebenshchikov’s unlikely friendship with Vladislav Surkov, the former influential Kremlin advisor and the man believed to be behind the creation of the controversial pro-Putin youth group, Nashi. A mysterious figure portrayed as possessing almost diabolical powers by the country’s opposition leaders, Surkov is also believed to write lyrics for the Russian rock group Agatha Christie.

“We are acquaintances,” Grebenshchikov says, simply. “I’ve heard he loves and respects our music and I in turn respect him for that.”

But while he may be aloof from the protests, Grebenshchikov adds his voice to the high-profile dispute over the all-female punk group Pussy Riot, three members of whom have been in jail some three months on suspicion of performing an anti-Putin song at Moscow’s biggest cathedral in late February.

“People had a right to punish them in some way,” Grebenshchikov says. “But to put them in jail is totally absurd. The justice system that this is being performed under is not worthy of the name of justice.”

“There is a resemblance of justice in Russia right now, but any government official who wants to break the law can get away with it. This is the same all over the world, of course. It’s just that in Russia it’s so evident and, well, stupid.”

He frowns slightly, as if aware he has compromised slightly his policy of non-commitment. “But this is Babylon, yeah? Who told you it was going to be any different?”

As the interview draws to a close, Grebenshchikov laughs when asked what he makes of Dylan’s recent acceptance of a state honor from U.S. President Barack Obama.

“I understand exactly why he did it,” he smiles. “It’s a nice toy. I have a Russian state honor too, somewhere. It made my mother happy and I’d accept one from Putin if she was still alive. The main thing is not to take it, or yourself, too seriously.”

Another thing Grebenshchikov has in common with Dylan is his love of the road, his exhausting concert schedule almost rivaling his U.S. counterpart’s famed “Never Ending Tour.”

“We could probably make more money just sitting in Moscow and playing corporate gigs and the like,” he admits. “But, you know, this is much better – this is my life.”