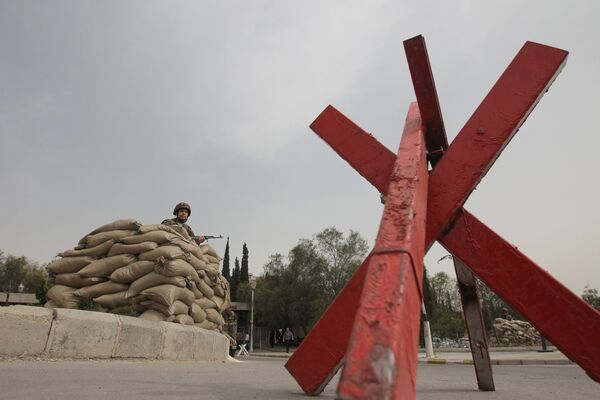 © RIA Novosti . Valeri Melnikov
/
Go to the photo bank
Subscribe
Russian Foreign Minister Sergei Lavrov said on Thursday that the UN Security Council would not allow a mandate on the intervention into Syria.

Russian Foreign Minister Sergei Lavrov said on Thursday that the UN Security Council would not allow a mandate on the intervention into Syria.

"There will be no external intervention by the [UN] Security Council, I guarantee you," Lavrov told journalists in Kazakhstan's capital of Astana.

Western countries have been attempting to make the UN Security Council take tough measures against the Syrian government, where according to UN statistics some 9,000 have been killed during clashes between government forces and the opposition since March of last year. So far the Security Council has not come to a unanimous decision since both Russia and China have vetoed intervention into Syria so as not to repeat the "Libyan scenario."

Earlier on Thursday, UN special envoy Kofi Annan said his six-point peace plan aimed to stop violence in Syria is "not being implemented."

“Today, despite the acceptance of the six-point plan and the deployment of a courageous mission of United Nations observers to Syria, I must be frank and confirm that the plan is not being implemented,” he told the UN General Assembly.

The six-point plan put forward by Annan in March called for a ceasefire and access for humanitarian agencies to Syria. It also envisioned the release of detainees, a political dialogue with account for the aspirations of the Syrian people, and unrestricted access of international media to the country.

Russia's Ambassador to the UN, Vitaly Churkin, also said on Thursday that Russia has proposed holding an international conference on settling the situation in Syria in the near future.