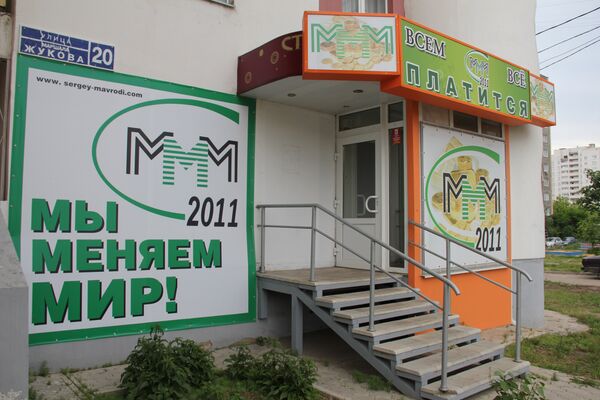 Twenty years after its first collapse in Russia, Sergei Mavrodi's MMM pyramid scheme came under formal investigation once again on Thursday, with the authorities opening a criminal case against a “group of unidentified persons” accused of setting up the MMM 2011 financial pyramid.

Twenty years after its first collapse in Russia, Sergei Mavrodi's MMM pyramid scheme came under formal investigation once again on Thursday, with the authorities opening a criminal case against a “group of unidentified persons” accused of setting up the MMM 2011 financial pyramid.

MMM is an acronym of the Russian for “We Can Do a Lot” and "We Change the World" – but Mavdrodi's empire may not be doing it for much longer.

But a lawyer for the project’s mastermind, Sergei Mavrodi, claims there are no legal grounds for charging him.

“I do not have a single fact proving that Sergei Panteleyevich [Mavrodi] was the founder of MMM-2011,” lawyer Roman Tabachkov said, adding his client was only an “advisor” – “a person who gave private recommendations.”

“Any citizen has the right to do with his money whatever he wants: burn it, fold a paper plane, whatever,” he said, stressing MMM clients had turned for advice to Mavrodi of their own will.

“All of the claims the police have against Mavrodi are groundless,” Tabachkov claimed.

Last year, Mavrodi announced MMM-2011, explicitly stating it would be a Ponzi scheme, and disclaiming any guarantees or promises of success.

“Even if you strictly follow all instructions, you can still lose," he wrote on a website describing the project. Depositors would be paid solely from funds invested by other depositors, he said, and there would be no attempt to generate income in any other way.

A 30-year-old man from Sochi who took out a loan secured by his apartment to buy MMM-2011 shares became the scheme's latest fatal casualty, after he committed suicide on June 2.

MMM-2011 uses an online payment system, WebMoney, to allow investors to buy tickets that work like shares, but have no real value. Mavrodi has promised investors returns of 20-30 percent per month.

Tinkoff Credit Systems bank senior manager Oleg Anisimov published a letter on May 16 he claimed was from a senior MMM member, forecasting the scheme’s imminent demise.

Mavrodi announced the opening of a new scheme, MMM-2012, on May 31, after reports of the closure of his MMM-2011 offices in Ukraine. He then stopped payments to members of the existing scheme. Mavrodi said MMM-2012 will be a new structure to assist the members of the MMM-2011 structure, which he said would not be folded.

The Russian authorities estimated the MMM scam has in the past attracted between two and five million investors, including a number of high-profile celebrities, who lost around $1.5 billion when its first pyramid incarnation collapsed in 1994. A previous Mavrodi-owned MMM import company and MMM bank were investigated by the tax authorities in 1992, after the bank went bust.

The collapse of Mavrodi's 1990s MMM pyramid scheme cost millions of Russians their life savings. Mavrodi subsequently became a fugitive, before serving out a four-and-a-half year prison term in the mid 2000s.