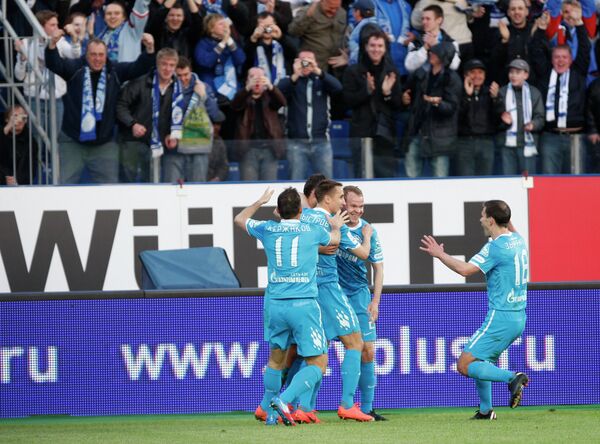 A huge piece of racist graffiti that appeared bearing the name of Zenit St. Petersburg has damaged the Russian club's image, a spokesman for UEFA told R-Sport on Thursday.

A huge piece of racist graffiti that appeared bearing the name of Zenit St. Petersburg has damaged the Russian club's image, a spokesman for UEFA told R-Sport on Thursday.

Zenit are the only major Russian team never to field a black player, and former coach Dick Advocaat has said that pressure from some Zenit fans prevented him signing black players during his time at the club.

The slogan "There's no black in Zenit's colors" appeared on the bank of the Neva river in central St. Petersburg. It is about 10 meters long and clearly visible from the opposite bank.

Zenit's place in next season's Champions League is not in danger but the incident reflects badly on the club, UEFA spokesman Sergei Borisov said.

"I don't think that anyone's seriously looking at the question of a ban from European competition right now, but the St. Petersburgers have damaged their standing once again," he said.

The graffiti could be cited if UEFA charges Zenit with a racism offence in future, Borisov said.

"If something similar happens on the day of a match in European competition and there is an investigation, this incident will not go unnoticed," he said.

"The worse a club's record is, the stricter future penalties will be."

The same slogan already appeared during 2004 UEFA Cup qualification match with ASKO Pasching in Austria, when a fan ran onto the pitch with these words written on his shirt, earning Zenit a warning from UEFA.

Zenit were fined for their fans' behavior during the November 2011 Champions League game against APOEL Nicosia, when the referee had to stop the match and lead the teams off the pitch because of thick smoke caused by Zenit fans using pyrotechnics.