Putin Aides Will Not Interfere in Cabinet - Medvedev 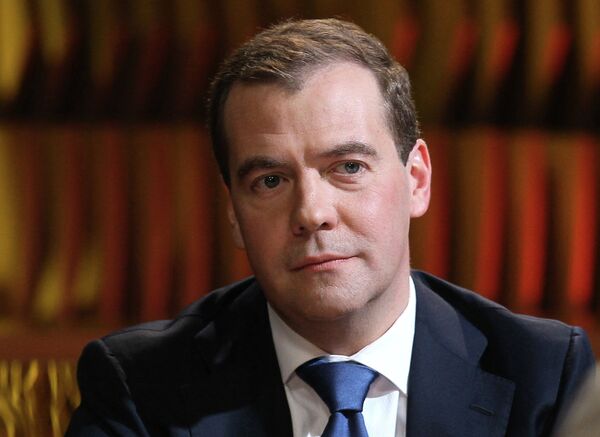 The former Russian ministers now serving as aides in the new presidential administration will have no influence on the work of the Cabinet, Prime Minister Dmitry Medvedev said on Monday.

The former Russian ministers now serving as aides in the new presidential administration will have no influence on the work of the Cabinet, Prime Minister Dmitry Medvedev said on Monday.

Five ministers have left the government for posts of aides in the administration of Vladimir Putin, who was inaugurated president last month after serving four years as prime minister.

“They will all have their own areas of responsibility and will have nothing to do with the decisions made by the government," Medvedev said in an interview with one of Russia’s best-known journalists, Vladimir Pozner, on Russia’s Channel One television network.

"They will have to conduct their business and fulfill certain obligations,” he said.

Medvedev, who became chairman of the ruling United Russia party at the behest of its former leader, President Putin, also explained why widely criticized former Interior Minister Rashid Nurgaliyev was replaced and why another controversial official, Defense Minister Anatoly Serdyukov, remained in his post.

In 2011, then-President Medvedev launched a broad police reform, slashing the force from 1.2 million to its current 1 million through reevaluation tests in an attempt to cull corrupt and incompetent officers.

“I believe that something was achieved [in reformations]. Nevertheless, Nurgaliyev did not stay in his post, because it was high time for someone else to take charge of this process,” Medvedev said.

A staunch Putin loyalist, Nurgaliyev weathered numerous media storms during his time in office, including calls for his dismissal after police officer Denis Yevsyukov went on a shooting spree in a Moscow supermarket in 2009, killing two.

“The Interior Ministry is a very complicated department, which is undergoing a reformation process. Moreover, the public pays close attention to the ministry and any failure, not to mention abuse-of-office cases, are reflected on the minister,” Medvedev said adding that Nurgaliyev was “an honest minister.”

Medvedev said that although criticized Defense Minister Anatoly Serdyukov achieved a lot in improving the Russian military and therefore was re-appointed to this post.

“I believe that Minister Anatoly Serdyukov, no matter what people say about him and no matter how he has been criticized, is a successful minister and in the past four or five years of the Defense Ministry’s reformations has done so many things that no one before him accomplished,” Medvedev said.

In 2010, Russia launched an ambitious military modernization program, allocating 20 trillion rubles (about $730 billion) to upgrade the country's armaments over the next 10 years.

However, the program suffered from a war over prices between the Defense Ministry and Russian manufacturers of military equipment.

The situation with defense contracts for 2011 fell under the spotlight in May after then-President Medvedev openly criticized Defense Ministry officials for stalling the process. The military complained over "skyrocketing prices" on armaments.