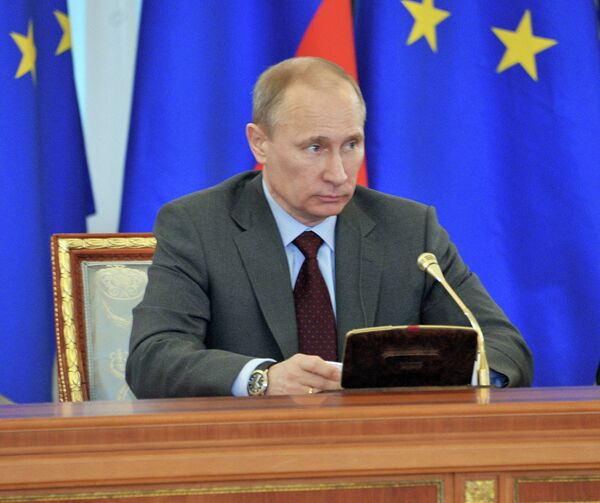 Russian President Vladimir Putin is expected to face more calls to increase pressure on his embattled Syrian counterpart Bashar al-Assad when he meets leading EU officials in his hometown of St. Petersburg on Monday.

“We want to work closely with Russia to find a way to end the violence and support [UN envoy] Kofi Annan’s six-point plan,” said EU foreign policy chief Catherine Ashton in a statement ahead of Monday’s summit. “Russia’s role is crucial.”

The statement also said that Ashton had held talks with Russian Foreign Minister Sergei Lavrov on Sunday and that the two diplomats had agreed the situation in Syria was at a “critical point.”

Russia has denied that it is protecting Assad or that it has any special interests in Syria, but has twice – along with China - vetoed UN resolutions against Damascus over what it calls a pro-rebel bias. Moscow has, however, fully backed Annan’s plan, which calls for the withdrawal of heavy weaponry from urban areas and a ceasefire to end 15-months of spiraling violence there.

Putin said in February in a pre-election campaign article that Russia would not allow a repeat of the “Libyan scenario.” Russia abstained from the March 2011 UN Security Council vote on the resolution that led to NATO airstrikes against forces loyal to Libyan leader Muammar Gaddafi and his eventual death at the hands of rebels.

The St. Petersburg summit comes a day after Assad, in a televised address, denied that government forces were to blame for the May 25 massacre of over 100 people, including dozens of children, in the Syrian town of Houla. Assad said the killings were an “ugly crime” that even “terrorists” would balk at carrying out.

The United Nations, citing eyewitnesses, has said pro-Assad militia fighters were responsible for the slaughter. Russia has criticized Syria over its shelling of the town, but says it does not rule out that rebels carried out the majority of the killings as a “provocation” ahead of a visit by Annan to Syria.

But Putin insisted after talks with German Chancellor Angela Merkel on Friday that while Russia had “many years of good relations with Syria,” those who accused Russia of supporting the Assad regime were “wrong.” He also said that weapons Russia was supplying to Syria could not be used in a civil war.

Putin was speaking after U.S. Secretary of State Hillary Clinton said Russia’s stance on Syria was leading to “civil war” there.

The United Nations says at least 9,000 people have died since the revolt against Assad began in March 2011.