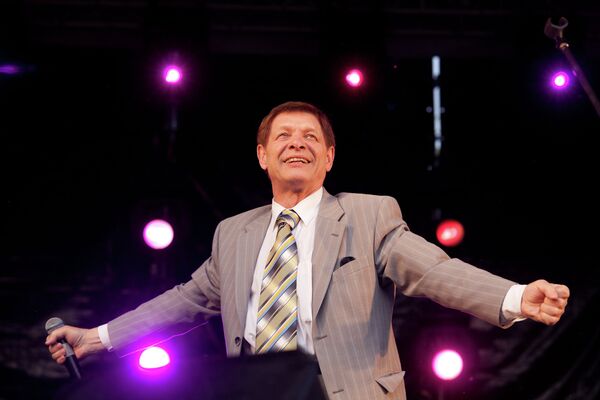 © RIA Novosti . Mikhail Mokrushin
/
Go to the photo bank
Subscribe
Russian baritone Eduard Khil, whose Trololo song enjoyed a comeback in 2010 after decades of oblivion, died in a St. Petersburg hospital at the age of 77 on Monday.

Russian baritone Eduard Khil, whose Trololo song enjoyed a comeback in 2010 after decades of oblivion, died in a St. Petersburg hospital at the age of 77 on Monday.

Khil, who was given a People's Artist Award in the Soviet Union, became famous in the West after his song of 50 years ago, I Am So Happy to Finally Be Back Home, which contains no words but only a melody of a series of "tro-lo-los," suddenly hit the internet.

The song originally contained lyrics about a cowboy riding a horse to his farm but the authorities told Khil the song could not be released as the lyrics associated with American lifestyle. So Khil went on singing the tune with nothing but an apolitical “trololo” lyric.

Two years ago, Khil’s Trololo song suddenly shot to fame after actor Christophe Waltz, who won an Oscar for his portrayal of a Jew-hunting Nazi in Quentin Tarantino's film Inglorious Basterds, sang the song on a TV show. More than 1.5 million people watched the video within a week.

Khil was immediately nicknamed Mr. Trololo on the internet, and Russian bloggers suggested he be nominated for the Eurovision song contest.

He was also the first singer to perform Where the Motherland Begins, a song Vladimir Putin performed while playing the piano in 2010 when he was prime minister before guests at a charity event, whose attendees included Sharon Stone, Kevin Costner, Mickey Rourke and Gerard Depardieu.

Khil's popularity waned in the 1980s with the advent of perestroika and the discovery of Western musicians.He traveled to Europe and the United States in the late 1980s where his concerts were a hit with Russian émigrés of the first post-1917 wave.

Khil was born in Smolensk on September 4, 1934. He died Monday morning in a St. Petersburg hospital after irreversible damage from a stroke at the end of May.