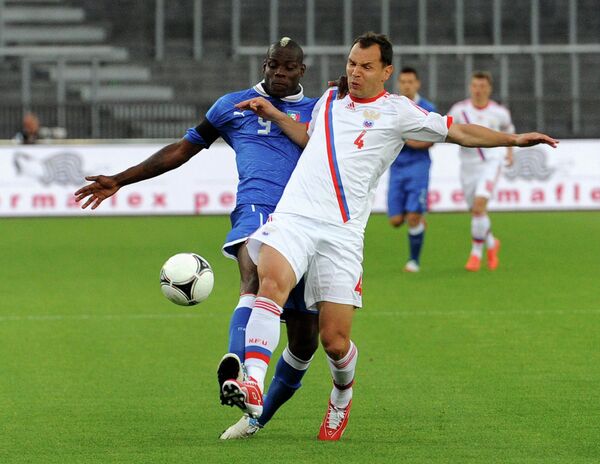 The 3-0 thrashing at the hands of Russia in their last Euro 2012 warm-up angered the Italians, left-back Domenico Criscito told R-Sport on Sunday.

The 3-0 thrashing at the hands of Russia in their last Euro 2012 warm-up angered the Italians, left-back Domenico Criscito told R-Sport on Sunday.

Two goals from Roman Shirokov and one from Alexander Kerzhakov secured Russia's first-ever win over the Italians in Zurich on Friday.

"No one in Italy expected the game would end with this scoreline," said Criscito, who did not make the final squad for the tournament after it was announced he was a suspect in the country's match-fixing scandal.

"I hope that this defeat will not have a negative influence on the psychological state of our team."

"I want to believe that the guys will actually be more motivated and angry, in a sporting way."

It was Italy's third consecutive defeat after 1-0 losses to the United States in February and 1-0 to Uruguay in November, their worst of form in 26 years.

Criscito had praise for the performance of his Zenit St. Petersburg teammates in the Friday's game.

"I never doubted that I play for the strongest club in Russia: with their performance against Italy, Shirokov, Kerzhakov and the other Zenit players showed everyone once again who the champions in Russia are."

Later Sunday, Russia fly out to Warsaw, their base for the June 8-July 1 tournament.

The Russians start their Friday against the Czech Republic, before further group stage games against co-hosts Poland and Greece.

Italy face Spain on June 10, then play Croatia and Ireland.

Criscito was dropped from Italy’s squad after police visited him at the national team’s training base and officially declared him a suspect in the match-fixing investigation.

The claims against Criscito stem from his time at Serie A side Genoa, when he played alongside defender Giuseppe Sculli, the grandson of a notorious mafia boss, who is also implicated in the investigation.

The left-back has repeated protested his innocence, and claims he has no link to the so-called Calcioscommesse sports betting scandal.