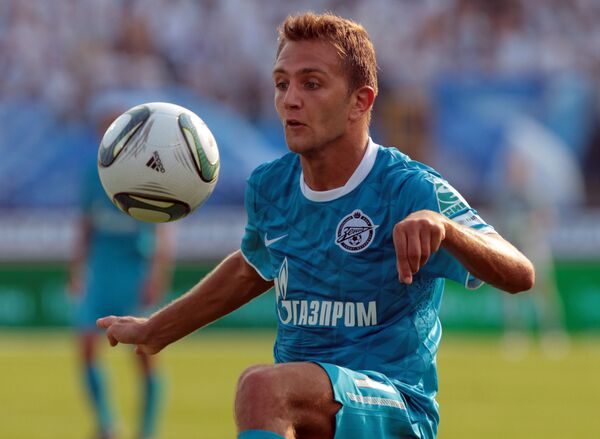 Italy defender Domenico Criscito will put his legal troubles to one side and return to training with Zenit St. Petersburg this month, he told RIA Novosti on Friday.

Italy defender Domenico Criscito will put his legal troubles to one side and return to training with Zenit St. Petersburg this month, he told RIA Novosti on Friday.

Criscito was dropped from Italy’s Euro 2012 squad after police visited him at the national team’s training base and officially declared him a suspect in a match-fixing investigation.

“If the boss tells me that I should be at Zenit’s training camp on June 15, then I’ll do exactly that,” Criscito said.

The left-back expects to play for league champions Zenit against Russian Cup holders Rubin Kazan in the season-opening Super Cup in mid-July, he said.

“At the first official match of the new season, the Russian Super Cup, I’ll be ready to help my team. I’m keeping in good condition.”

“I want to publicly thank Luciano Spalletti, who called me on the day it all happened and then supported me openly in the press.”

The claims against Criscito stem from his time at Serie A side Genoa, when he played alongside defender Giuseppe Sculli, the grandson of a notorious mafia boss, who is also implicated in the investigation.

The left-back has repeated protested his innocence, and claims he has no link to the so-called Calcioscommesse sports betting scandal.

“My teammates, the club management and the Zenit fans can be absolutely certain – I’m not guilty in any way,” he said.

“No one’s presented any charges against me and I’m not serving any sort of ban.”

Criscito, 25, has been Italy’s first-choice left-back since 2009 and played in all three of the country’s games at the 2010 World Cup. He has 25 caps and has yet to score for his country.

He joined Zenit in June 2011 and has since played 24 league games, scoring one goal.