Moscow Refuses to Get Used to U.S. Envoy's 'Gaffes' 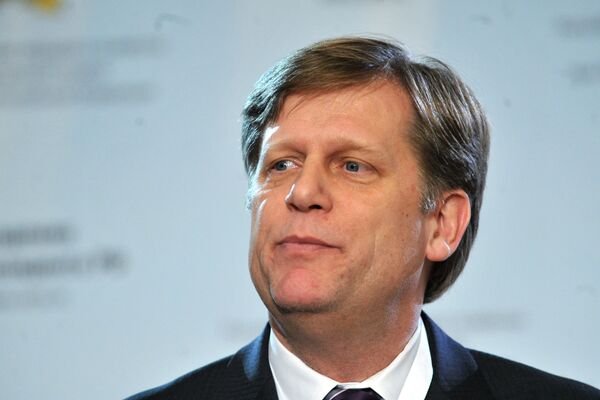 Moscow considers the "blunt" statements by U.S. Ambassador Michael McFaul to be totally unacceptable while his lack of professionalism could be detrimental to the reset of Russian-U.S. relations, a senior Russian diplomatic source said on Wednesday.

Moscow considers the "blunt" statements by U.S. Ambassador Michael McFaul to be totally unacceptable while his lack of professionalism could be detrimental to the reset of Russian-U.S. relations, a senior Russian diplomatic source said on Wednesday.

The U.S. State Department said on Tuesday that Russia would have to get used to McFaul’s outspoken statements as he is not a professional diplomat and often speaks plainly on sensitive matters.

“The Americans should not expect the government of a sovereign state to get used to impertinent remarks from the head of a diplomatic mission, who admits openly that he has just started to learn his craft,” the source, who spoke on conditions of anonymity, told RIA Novosti.

“It is understandable that the State Department immediately offered excuses for his gaffes, but it would be more appropriate to advise Mr. McFaul to get used to the fact that the lack of professionalism in diplomacy is a dangerous and unacceptable thing,” the source said.

The Russian Foreign Ministry on Monday blasted McFaul’s speech delivered to students at the Higher School of Economics in Moscow saying that his assessment of Russian-U.S. cooperation “goes far beyond the bounds of diplomatic etiquette.”

Russian diplomats were particularly dismayed by McFaul’s statement about the Manas airport in Kyrgyzstan, when the American diplomat told students that Russia had bribed the Central Asian state in 2009 to prompt the country to shut down the U.S. military airbase there. He added that his country had also offered a bribe to Kyrgyzstan, but ten times smaller.

McFaul has responded to the Russian Foreign Ministry’s criticism by writing in his Twitter blog that he is “still learning the craft of speaking more diplomatically.”

The U.S. ambassador has come under criticism from Russian officials and public a few times since his arrival in January. Critics accused him of supporting Russian opposition or even plotting a revolution in Russia, which McFaul fiercely denied.