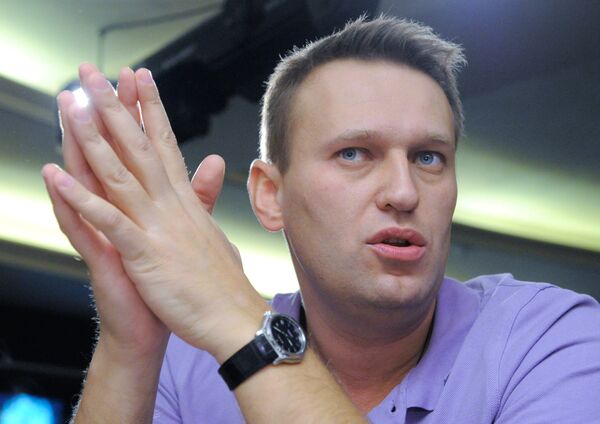 Opposition figurehead Alexei Navalny publicized on Wednesday the identities of the literary figures and businessmen - including the vice-president of the country’s biggest insurance company - financing his efforts to tackle Russia’s rampant corruption.

“I am making public the list of the ‘16 brave ones’ – the 16 people who have publically and openly agreed to become sponsors of our Anti-Corruption Fund,” Navalny wrote on his LiveJournal blog on Wednesday.

Lawyer Navalny has been a key figure in the demonstrations against the rule of President Vladimir Putin and has served two 15-day jail sentences on protest-related charges in the last six months.

“We are trying to break the stereotype that wealthy people and businessmen are afraid to donate money openly to social-political activities as they are afraid of some terrible repression,” Navalny also wrote.

Navalny also told Russia’s Vedomosti business paper that the “brave ones” had already donated 4.4 million rubles ($136,000) and that the same sum had been promised for the second half of the year.

“Corruption is a humongous problem for Russia – it’s far beyond an economic problem,” Borisovich told RIA Novosti. “It’s a development problem that it turning into national tragedy and has begun eroding morals…We need a campaign from the top down.”

Borisovich also said that while he was not in total agreement with Navalny’s politics, he believed the financing of his anti-corruption drive would set a “precedent” for political fund-raising in Russia that could see a flood of donations to opposition movements.

But Moscow-based analyst Alexei Mukhin said he doubted participation in the project was a risk for the businessmen involved.

“Both Putin and [Prime Minister Dmitry] Medvedev have called for a fight against corruption,” he told RIA Novosti. “This can in no way be seen as a sign that the Kremlin is losing the support of the business community.”

Medvedev made the fight against the graft that sees Russia consistently hover around 150th place in Berlin-based NGO Transparency International’s corruption index a cornerstone of his 2008-2012 presidency. But speaking just days before making way for Putin’s May 7 return to the Kremlin, he admitted that he had achieved only “modest” results.

Officials from Medvedev’s ruling United Russia party declined to comment on Navalny’s list of financers when contacted by RIA Novosti on Wednesday.

Navalny's Anti-Corruption Fund is also set to receive more money from a co-branded credit card he says will be launched soon. The scheme will see one percent of all purchases made with the card donated to the fund by the partner bank.

Currently the subject of a number of criminal investigations involving money-laundering, fraud and incitement to riot, Navalny has said he is being targeted by the authorities for his opposition to the Kremlin.