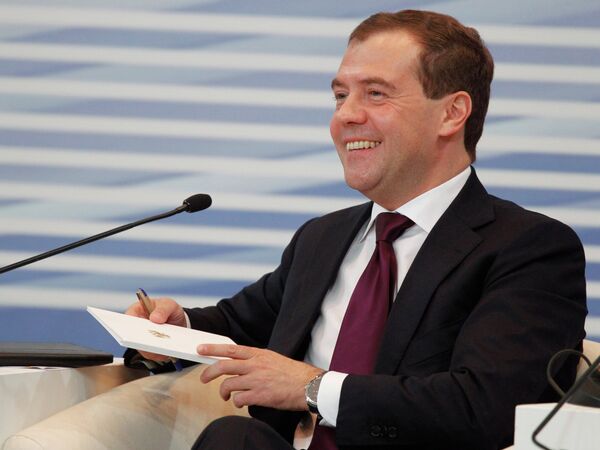 In late-April, President Vladimir Putin announced that he is stepping down from the helm of United Russia in favor of Medvedev. The move marked the latest in a string of attempts by Putin to distance himself from a political party that is rapidly loosing support.

Putin presided over the United Russia from 2008-2012. He has headed the party since he became prime minister in 2008.

Medvedev became a member of United Russia on May 22.

The 13th congress of the United Russia party in Moscow brought together 670 delegates and about 1,600 guests. Serbian President-elect Tomislav Nikolic and 30 foreign delegations attended the event.

On the eve of the congress, Medvedev proposed sweeping reforms within the party to make its work more efficient and transparent.

However, on May 20 Putin unveiled a government dominated by loyalists, leaving Prime Minister Medvedev limited scope to pursue his reform agenda.

After the announcement of his election, Medvedev urged United Russia to retain majority in parliament. "I don't think that anyone present here will argue that in five years when the next election to the State Duma is held… United Russia must be at the top again and win the parliamentary majority.”

If the party wins the parliamentary election, State Duma speaker candidates could be selected on competitive basis, Medvedev said. "In the future parliamentary election United Russia will again try to win the support of the majority of citizens. And if we resolve this task - which I don't doubt it will - it would be right to consider the issue of our candidates to the leadership in the State Duma, in particular the post of Duma chairman, in a democratic, open way, on an alternative basis.”

Medvedev said that United Russia does not need a cleansing but should get rid of those members who discredit it. "The absolute majority of party members and people sympathizing with the party are honest and decent. But there is nothing extraordinary in the fact that some crooks are constantly trying to hang on.”

"We must get rid without delay of those who discredit themselves and thus discredit the party and instead attract to party ranks as many new, sincere, creatively-thinking people with initiative as possible."