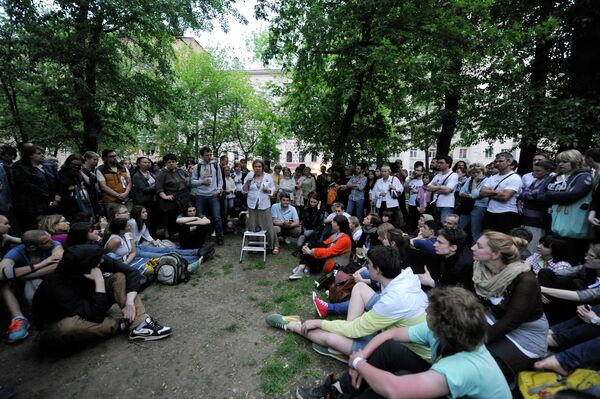 © RIA Novosti . Alexei Kudenko
/
Go to the photo bank
Subscribe
“Those who have…suggestions for what to do…in case of a crackdown on the camp…raise your hands!” the anti-Putin protesters occupying a downtown Moscow boulevard intone in unison, their voices amplifying the words of the speaker.

“Those who have…suggestions for what to do…in case of a crackdown on the camp…raise your hands!” the anti-Putin protesters occupying a downtown Moscow boulevard intone in unison, their voices amplifying the words of the speaker.

“I don’t like it,” a girl from the crowd says later, shaking her head. “This chanting feels like a sect.”

“But it gets the job done, doesn’t it?” a protester next to her replies. The girl looks unconvinced, but has no retort.

Since May 9, Russia has had its own “Occupy” camp, which although it has been forced by police to switch sites on more than one occasion, has seen between several dozen and several thousand Kremlin critics maintain and organize a round-the-clock protest.

Unthinkable even this time last year, Moscow’s Occupy camp is a unique case of grassroots self-organization in Russia, analysts and participants said.

“It’s organization without organizers,” said camp member Maxim Sannikov. “The camp has a horizontal power structure, and it works.”

Like the better-known movement in the West, Russia’s Occupy movement also dates back to the fall of 2011, said leftist activist Isabelle Magkoeva.

“We were sitting in the kitchen discussing how they occupied Brooklyn Bridge. Then we thought and brainstormed until somebody said: ‘Today, Brooklyn Bridge, tomorrow, [Moscow’s] Bolshoi Kamenny’” bridge, she said.

A small group of protesters hijacked the landmark Moscow bridge soon after, decorating it with a banner bearing the Brooklyn-Moscow bridges slogan and a Guy Fawkes mask, the global symbol of the Occupy movement.

The story generated a tiny media splash, but attempts in the following months to occupy other public places such as bridges of train stations went unnoticed.

But all that changed after clashes broke out between demonstrators and police at a rally on the eve of the May 7 inauguration of Vladimir Putin for a third presidential term of office. Rolling protests continued for the next few days and police made hundreds of apparently arbitrary arrests, targeting anyone wearing a white ribbon, the symbol of the For Fair Elections movement.

“We came to Chistye Prudy on May 9 just because there was a free concert for [World War II] veterans, and we thought they wouldn’t crack down on us there,” Magkoeva said.

She and her leftist friends were preparing a separate “Occupy” event elsewhere, but ended up pitching their schemes to the disorganized crowd on the boulevard, which grew notably less passive once it had a decision-making mechanism, she said.

“It didn’t work out to well the first time, and we had some conflicts,” Magkoeva said. “But we had a really good assembly the very next day.”

The camp assembly gets round a ban on the public use of megaphones by using a “live microphone” to hold discussions on issues big and small, from money concerns to strategies in case of a police crackdown (the decision was to neither flee nor resist).

Between the repetitions and the discussions, which are encouraged, it is slow going, taking a good two hours every day to vote on points raised. But it gets the job done.

Donations have also seen the camp’s budget swell to almost 500,000 rubles ($16,600) at one point. At its peak, the Chistye Prudy camp also boasted a rough-and-ready café, an information center, a group in charge of leaflets and such, and a legal team. All this was guarded by a security team of scary-looking nationalists, who also maintained camp order – mostly through upholding a ban on alcohol and dealing with the occasional troublemaker.

And of course, there were the lectures, from talks by well-known political analysts to discussions on gay rights and a crash course in how to force the police to obey the law by a young Transparency International activist.

While evenings at the camp saw attendance rise to around three thousand, the core comprised a couple dozens activists who stayed around the clock.

Contrary to expectation, the majority of participants were not political activists. Only five people out of 80 to vote at one of the assemblies earlier this week were members of some group or other, said Artyom Temirov, himself a camp activist without political allegiances.

Unlike Western “Occupy” camps, activists in Moscow are focusing their ire on Putin’s state machine, widely believed to be ineffective and corrupt, and not on corporate capital, said political analyst Alexei Titkov.

The authorities were none too pleased. Though tolerating the camp for more than a week, they expelled it from their place at the feet of the monument to Kazakh poet Abai Qunanbaiuli on Chistye Prudy on May 16 and have since not allowed it to stay in one place for more than a few days.

“It all began to fall apart when they kicked us out of Chistye Prudy,” said Temirov, who was involved with moderating the assembly and is a member of the propaganda group. “But our group’s still active, as is the legal team.”

Grassroots Activity: Yes They Can

“She’s the future star of the revolution,” a colleague from a Moscow newspaper said in an undertone, watching the 21-year-old Magkoeva deftly manage the discussion at the assembly this week.

But she thinks otherwise.

“I’m not looking for fame here. The main thing is, it’s an experience of self-management,” Magkoeva said. “Without any of us – say, without me – the assembly still works just fine. Well, it works. Even if they arrest me, arrest Artyom and everyone, it will still go on. That’s our strength.”

“The camp proves that a certain part of the Russian society is capable of grassroots self-organization,” agreed analyst Stanislav Belkovsky, a political analyst who gave a speech at the camp.

A popular notion among Russian conservative pundits is that the populace, having no tradition of grassroots movements, is not ready for Western-style democracy. The notion has been cautiously endorsed by some Kremlin representatives under Putin, as well as before him.

But camps modeled on Occupy Moscow are already being attempted in about a dozen other Russian cities, despite protest activity so far being low in the provinces, said camp participant Sannikov.

“The camp is only sustainable through the warm season,” he said. “But we can use it to work out our long-term strategy and coordinate our demands.”

Anti-government protests ongoing in the country since December need a new format, and the Occupy camp has the chance of allowing protesters to formulate their demands for the authorities to hear, said analyst Titkov, who teaches at the Higher School of Economics in Moscow.

Assemblies and working groups provide more flexible tools for public representation than rallies, Titkov said in an interview on Friday.

The campers will yet have to find a way to connect with the main body of protest goers in Moscow, becoming spokespeople for the tens of thousands of discontented urbanites and not just a core of hundreds of supporters, said political analyst Mikhail Dmitriyev.

But they have the potential to do that, finally transforming the vague discontent behind the rallies into a set of clear demands, said Dmitriyev, who heads the Center for Strategic Research pro-Kremlin liberal think-tank.