Hundreds of Bikers Rally Near Iraqi Embassy in Moscow 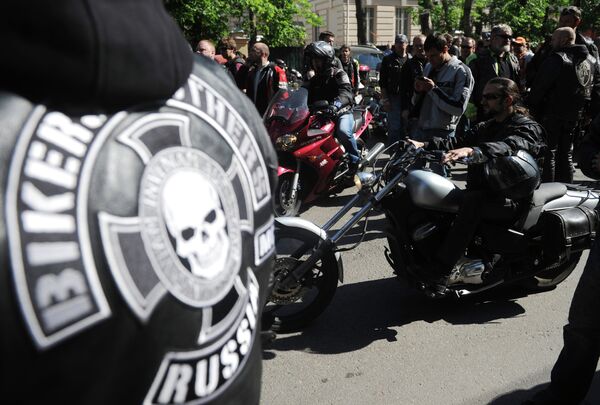 More than 300 people, including 200 bikers, gathered near the Iraqi Embassy in Moscow, protesting against the arrest of four Russian nationals who were held in Iraq on May 20 on espionage charges.

More than 300 people, including 200 bikers, gathered near the Iraqi Embassy in Moscow, protesting against the arrest of four Russian nationals who were held in Iraq on May 20 on espionage charges.

The bikers gathered near the embassy building and signed a petition to the diplomatic mission demanding an explanation of what the Russians were accused of.

Oleg Kapkayev, Alexander Vardanyants, Oleg Maksimov and Maxim Ignatyev, who were traveling through Central Asia, Iran and Turkey, were detained near the Iraqi capital of Baghdad on Sunday after they came from Iraqi Kurdistan, an autonomous region that does not require an Iraqi visa for travelers.

According to Russian Foreign Ministry spokesman Alexander Lukashevich, the travelers did not have Iraqi visas.

After being detained, the four men were transferred to an Iraqi military base where their documents were seized and espionage charges were brought against them, Alexander Orlov, a member of the Moscow-based motorcycle club RAMCC and the bikers’ lawyer said.

According to the document signed by over 300 people at the rally, the Russian Embassy in Baghdad was immediately notified about the bikers’ detention, but the Russian consul was not allowed to meet with the detainees.

The petition also states that the men were not provided with a lawyer during their questioning.

“As far as we know, the detainees were interrogated yesterday…they were charged with espionage and threatened with the death penalty,” the petition reads.

Orlov said that the men were planning to finish their trip in Pakistan.

“My clients were heading from Turkey to Iran and then to Afghanistan and Pakistan in a group of traveling bikers. Kapkayev, Vardanyants, Maksimov and Ignatyev separated from their fellow bikers in Turkey and decided to visit Iraq before moving on to Iran,” the lawyer said.

Orlov, who contacted his friends via text messaging on his phone, also said that the men could face up to ten years in jail if found guilty.

The Russian Embassy in Iraq called on the country’s Foreign Ministry on Thursday to release the bikers as soon as possible, Lukashevich said, adding that Iraqi President Jalal Talabani had promised the men’s quick release.

Russian presidential spokesman Dmitry Peskov also said the Foreign Ministry was doing its best to secure the release of the men.

Apart from the Moscow supporters, about 30 Latvian bikers also held a rally in front of the Russian Embassy in Riga to support the detained men, Latvian media said.

The four detainees have previously traveled throughout Latin America, the United States, Europe, China and Mongolia.