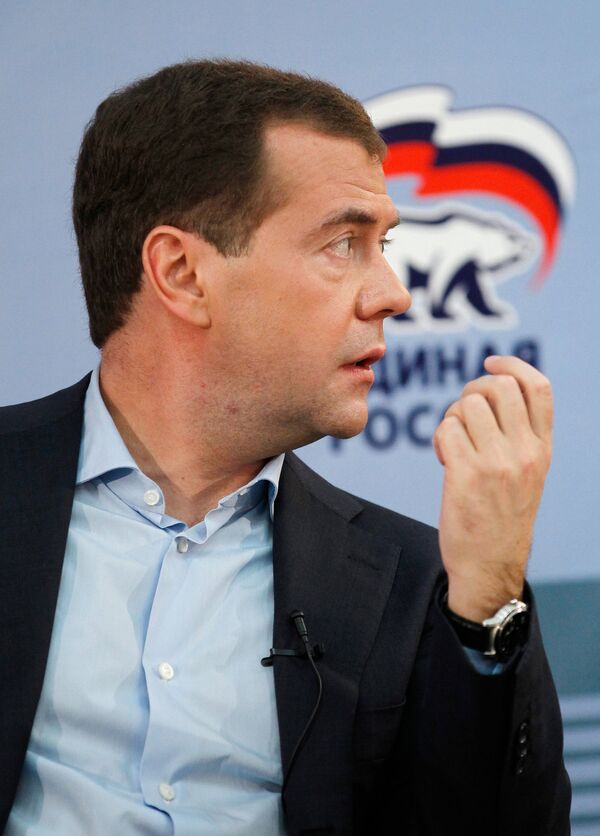 © RIA Novosti . Dmitriy Astakhov
/
Go to the photo bank
Subscribe
Russian Prime Minister Dmitry Medvedev, who in a few days will take up the leadership of Russia's ruling United Russia party, became a member on Tuesday.

Russian Prime Minister Dmitry Medvedev, who in a few days will take up the leadership of Russia's ruling United Russia party, became a member on Tuesday.

It is the first time in Russia’s recent history that the leader of a party has held the post of head of the government.

The Prime Minister only applied for party membership on Monday, and did not have to wait six months after applying as a candidate member required by the party charter.

The rule was waived for Medvedev as he has always been a supporter and headed the United Russia party list in parliamentary elections in December 2011, said Alexander Neverov, a United Russia senior official.

In late April, Medvedev, who was then head of state, agreed to head the ruling party and become a member. The incumbent president, Vladimir Putin, who presided over United Russia from 2008-2012, never formally joined the party.

Medvedev told Russian television in April that he sees the party as  a strong “center-conservative force” which must exist in the country's political arena. He also warned United Russia that it can and should change.

Medvedev also believes that the United Russia party will permanently retain its leading position, as there are no political forces in the country that are equal to it.

“In my opinion, the party has every opportunity to maintain a long-term leading position,” Medvedev said at a meeting after he joined the party.
He noted that the question is not about how many votes it got in the elections, but in taking responsibility. “In my opinion, there are no competitors to the United Russia in the potential for now,” he added.

“It has to keep its own brand … and, of course, make it more attractive,” Medvedev said at the meeting.

The party failed to preserve its constitutional majority in the lower house of parliament at the last December 2012 State Duma elections, though it still has a working majority of more than half of the deputies.

The election of a new party chairman will be a key issue when the Party Congress is held on May 26.