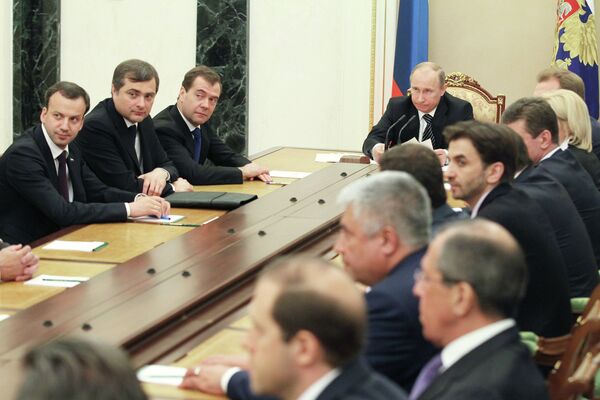 Russian President Vladimir Putin looks set to dominate the country’s new government after the appointment of loyalists to key cabinet posts on Monday, in a move that raises questions over the role of new Prime Minister Dmitry Medvedev.

Russian President Vladimir Putin looks set to dominate the country’s new government after the appointment of loyalists to key cabinet posts on Monday, in a move that raises questions over the role of new Prime Minister Dmitry Medvedev.

Medvedev had said during this weekend’s G8 summit meeting in the United States that there would be a “substantial renewal” of the cabinet presided over by Putin during his 2008-2012 stint as prime minister.

But there were only two major reshuffles in the new government, formed two weeks after Putin’s inauguration as president for a third term, as controversial Interior Minister Rashid Nurgaliyev lost his post and cabinet veteran economist Andrei Belousov took over as economy minister.

“Medvedev has promised many things,” said analyst Lilia Shevtsova at the Carnegie Moscow Center think-tank. “This government is officially Medvedev’s, but in reality it is Putin’s.”

Medvedev was Putin’s handpicked successor as president in 2008, but remained the junior partner in Russia’s ruling tandem.

Shuvalov has faced accusations in recent months from Western media outlets and Russian anti-corruption bloggers that he misused his position to enrich his wife, Olga, to the tune of over $100 million. Both he and his wife denied the allegations.

“This appointment surprised no one,” said Shevtsova. “Shuvalov, who is very experienced, will coordinate the work of other ministers.”

Putin ally Igor Sechin lost his post as deputy prime minister, but maintains influence over energy policy after Putin nominated him to the board of the main state energy holding company on his last day as prime minister.

Medvedev has pledged to launch wide-ranging reforms and a privatization program to diversify Russia's economy away from its reliance on oil and gas.

"Control over budget policies will be maintained,” said Natalya Orlova, chief economist at Russia's Alfa-Bank. “And I believe this is very good.”

“But on the other hand, the appointment of very strong economists to the cabinet, such as [former presidential economic aide Arkady] Dvorkovich and Belosouv, of whom the market has very different attitudes toward, means it is unclear if the government will continue its privatization policies," she added.

Interior Minister Nurgaliyev was replaced by Moscow police chief Vladimir Kolokoltsev. Nurgaliyev, who had been in the post since 2003, had come under fire over a number of violent crimes committed by Russia’s police officers in recent years.

But Kolokoltsev’s Moscow police force was also criticized by opposition leaders over what they called arbitrary arrests and heavy-handed tactics during protests in the capital in the wake of Putin’s May 7 inauguration.

Four of the deputy prime ministers are Putin loyalists who were reappointed to the post.

Surkov was appointed to the cabinet by Putin last year after serving as Kremlin chief ideologist since 2004. He is widely believed by analysts to have been behind the creation of pro-Kremlin youth group Nashi.

Rogozin was named Russia's NATO envoy by Putin in 2008, before becoming deputy prime minister last year and taking over the supervision of the defense industry. He courted controversy with an advertisement for his nationalist Rodina party in 2005 that seemed to label Caucasus migrants “trash.” Rogozin, who said last year that “the Russian people are now in the position of a discriminated majority,” has always denied the parliamentary election campaign was racist.

Khloponin was made governor of Siberia’s vast Krasnoyarsk region in 2002, before being appointed deputy prime minister and presidential envoy to the volatile North Caucasus by Medvedev in 2010.

Kozak, like Medvedev and many other key allies, is Putin’s former colleague from his days working at St. Petesburg’s City Hall in the 1990s.

Dvorkovich acted as Medvedev’s Kremlin team during his one-term presidency and was an architect of his plans to modernize the Russian economy. Golodets, who will deal with social issues, has business links to tycoon Mikhail Prokhorov, who reportedly turned down a ministerial post after finishing third in the March 4 presidential elections.

Controversial journalist and senior official in the ruling United Russia party Vladimir Medinsky was named new culture minister. Medinsky has faced allegations of plagiarism and claims that he abused his position to promote his series of wildly popular books purporting to shatter "myths" about the Russian people.