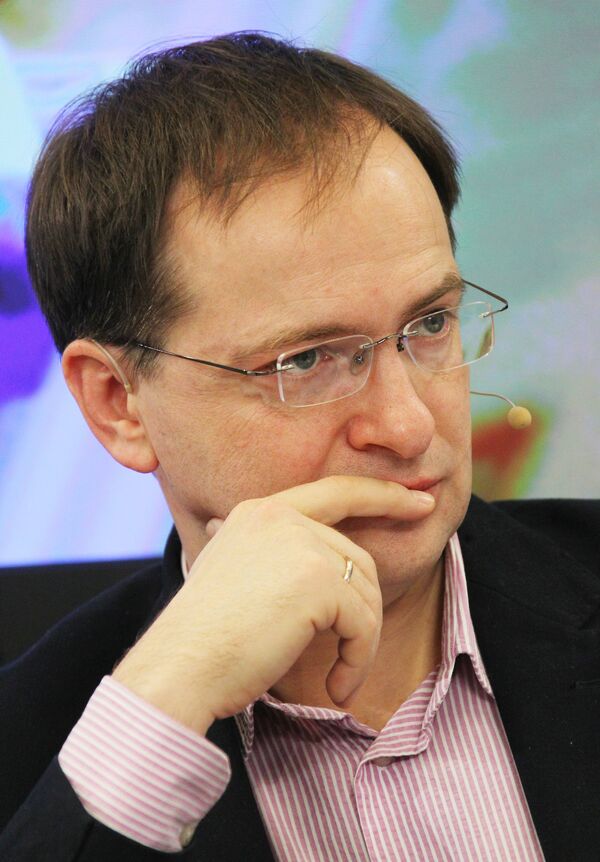 © RIA Novosti . Alexandr Natruskin
/
Go to the photo bank
Subscribe
A journalist known for his bestselling non-fiction books combating “myths about Russia” and accused of plagiarism in his dissertation was made Russian Culture Minister on Monday.

A journalist known for his bestselling non-fiction books combating “myths about Russia” and accused of plagiarism in his dissertation was made Russian Culture Minister on Monday.

Vladimir Medinsky, 41, a senior official in the ruling United Russia, will replace Alexander Avdeyev, who had held the job of Culture Minister since 2008, President Vladimir Putin said.

Medinsky, a Muscovite and a graduate of the prestigious Moscow State Institute of International Relations, briefly headed the State Duma’s culture committee during his tenure as a federal lawmaker in 2004-2011.

He is primarily known to the public for his Myths About Russia series of books, published since 2008 and comprising titles such as “About Russian Alcoholism, Sloth and Cruelty” and “About Russian Slavery, Dirt and ‘Prison of the Nations.’”

The debut volume in the series was attested by Kommersant daily “Russia’s bestselling history book” with 170,000 copies sold as of 2009. However, the publication also said Medinsky used his position as a lawmaker to promote the books, though he denied the allegations.

Numerous publications, including in the online magazines Actual History and Polit.ru, accused Medinsky of massive plagiarism in his dissertation thesis, which deals with foreigners’ accounts on Russia during the 15-17 centuries.

Medinsky denied plagiarizing, saying he just used stereotypical phrases in his research in line with academic guidelines. The country’s scientific community was split on the issue, with prominent researches weighing in both for and against Medinsky’s professional skills as a historian.

Russian history remains a battlefield, with abundant textbooks and research papers offering vastly different interpretations of its crucial moments from Prince Rurik in the 9th century to the Bolshevik times, usually depending on the author's political convictions.

The previous government made attempts to produce a unified history outlook to be taught at schools, but the process was never completed, with more than 70 school textbooks still available for educators.