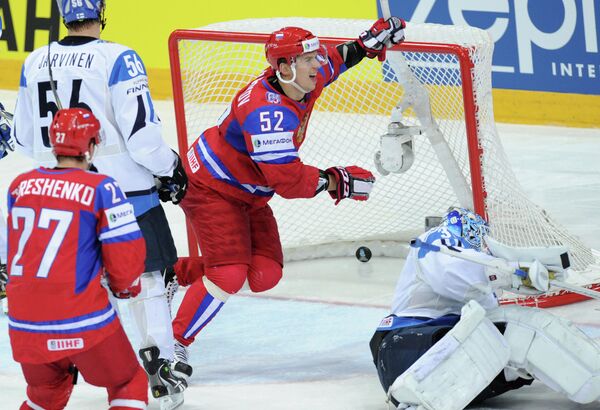 © RIA Novosti . Alexey Filippov
/
Go to the photo bank
Subscribe
Russia made the final of the world hockey championships Saturday after Evgeni Malkin's hat-trick helped the team to an emphatic 6-2 win over reigning champion Finland.

Russia made the final of the world hockey championships Saturday after Evgeni Malkin's hat-trick helped the team to an emphatic 6-2 win over reigning champion Finland.

The Russians humiliated the Finns with a irrepressible display of attacking hockey led by their NHL stars Malkin and Alex Ovechkin, gaining brutal revenge over a team that dumped the Russians out of last year's semifinal in Bratislava.

Malkin took his championships-leading tally to 10 goals, with eight assists, in eight games.

The result will restore faith in Russian hockey among nervy Sochi Olympics officials after last year's fourth place in Slovakia, the country's worst performance in the annual tournament since fifth place in 2006.

The Czech Republic face Slovakia in Saturday's other semifinal.

Russian fans feared the worst just seven minutes in, when Janne Niskala put the Finns ahead with a spectacular slap shot with his left skate embedded in the blue line.

A ricochet off Denis Kokarev sent the puck flying into the top corner with Semyon Varlamov helpless in the Russia goal.

Alexei Tereshchenko almost leveled it seconds later but had a close-range effort blocked.

Malkin did equalize with four minutes left of the first period, sweeping home a rebound from Nikita Nikitin just right of goal, finding a gap through three Finnish players.

Malkin's second goal - and ninth of the championships so far - came on a power play with Ossi Vaananen off for hooking.

The Pittsburg Penguins center collected the puck from Nikolai Zherdev and turned to fire between Petri Vehanen's legs in one slick motion.

The Finns had a flurry of chances early in the second period but were frustrated by Russia's physical defense and top saves from Varlamov.

The Colorado Avalanche stopper blocked a long shot from Janne Pesonen and a double effort from Mikko Koivu of the Minnesota Wild.

Malkin left the ice clutching his right arm after crashing into the boards following a seemingly innocuous coming together with Joonas Jarvinen, who was nevertheless sin-binned for tripping.

CSKA Moscow wing Sergei Shirokov skipped through on the power play but shot woefully wide from a good position eight minutes into the second period.

Alex Ovechkin gave the Russians a two-goal cushion half way through the game, swinging in from the left and slinging the puck over Vehanen's right shoulder.

Shirokov went one-on-one with five minutes left in the period, but Vehanen blocked.

Malkin made it four with a bullet shot into the left corner from out right. It was his tenth goal of the championships, a hat-trick strike that prompted the Russian fans to hurl their red caps onto the ice in celebration.

Kokarev extinguished any hopes of a Finnish comeback barely a minute into the third period, skirting around the back of the goal to slam into the far corner, the puck glancing off Vaananen's stick on its way.

The trouncing was complete nine minutes into the third period when Shirokov poked into an empty net after Vehanen had saved from Evgeny Biryukov.

Kokarev almost made it seven seconds later but Vehanen stretched for a last-ditch parry that rattled off the frame of the goal.

The Finns grabbed a consolation goal through Mikael Granlund with three minutes left on the clock, redirecting Jarvinen's blue-line shot between Varlamov's legs.