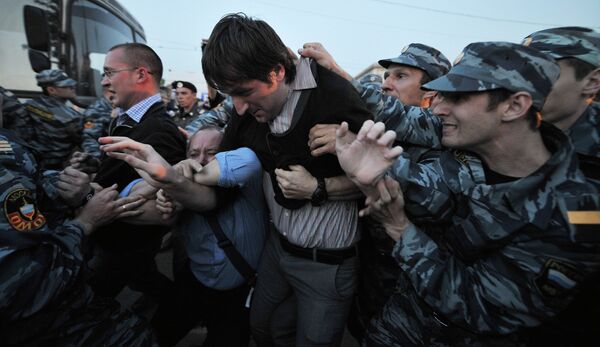 Over 30 protesters have been detained in downtown Moscow’s Kudrinskaya Square, a law enforcement source told RIA Novosti on Thursday.

Earlier, it was reported that late on Wednesday police in the Russian capital detained a Russian opposition figurehead, Ilya Yashin, and at least 16 other activists protesting against President Vladimir Putin as they continued round-the-clock street protests on Kudrinskaya Square after being ejected from their previous Occupy-style tent camp in another part of the Russian capital.

Riot police dismantled the camp in the Russian capital’s fashionable Chistye Prudy neighborhood early on Wednesday morning, briefly detaining over 20 people. Activists decided to continue with the protests and moved to Kudrinskaya Square next to a landmark neo-classical Stalin-era tower a short walk from the U.S. embassy.

A police spokesman said the protesters were violating public order, had blocked traffic on a nearby street and torn a rearview side mirror from a police van.

Opposition parliamentarian Ilya Ponomaryov wrote in his LiveJournal account that policemen also confiscated from the activists food, water and their pool of cash totaling some 250,000 rubles (over $8,000), without filing any of the necessary documentation. He also estimated the number of detained activists at 30.

The authorities earlier accused activists of causing some $650,000 worth of damage to greenery during their week-long stay at the Chystye Prudy camp, an accusation dismissed by protest leaders.

The Chistye Prudy camp was attended by up to 3,000 protesters at its peak and attracted activists of a variety of political persuasions, from anarchists to nationalists, all apparently united only by their opposition to Putin.

Around a dozen masked nationalists acted as camp security and followed the protest to its new location on Wednesday.