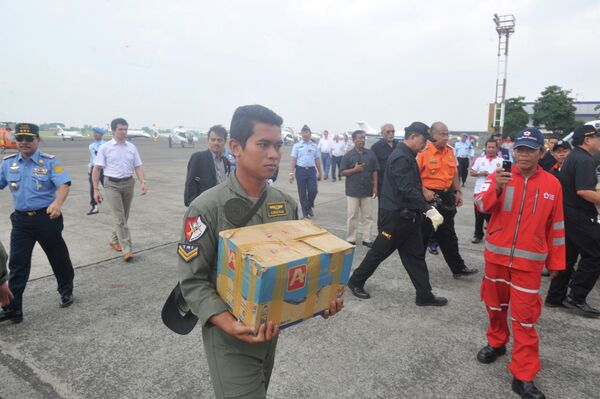 © RIA Novosti . Alexandr Utkin
/
Go to the photo bank
Subscribe
A voice recorder from the Russian Sukhoi Superjet 100 passenger jet that crashed a week ago in Indonesia recorded the last two hours of conversation in the cockpit, the Russian Industry and Trade Ministry said.

A voice recorder from the Russian Sukhoi Superjet 100 passenger jet that crashed a week ago in Indonesia recorded the last two hours of conversation in the cockpit, the Russian Industry and Trade Ministry said.

The plane slammed into a steep side of Mount Salak near Jakarta shortly after take-off on a demonstration flight on May 9. All 45 people on board were killed.

Yury Slyusar, the ministry’s deputy head and the chief of a special commission set up by Russian Prime Minister Dmitry Medvedev to investigate the crash, said special equipment needed to decode the cockpit voice recorder will be delivered from Moscow to Jakarta on Thursday.

“If no technical problems arise, the whole procedure [of decoding] will not take long,” Slyusar said, but did not specify when the decoding could be completed.

Earlier on Wednesday, ANTARA News reported that a joint team from the Indonesian army's Kopassus special force and the Indonesia Rock Climbing Federation discovered the black box at the site of the crash.

The Indonesian military said the black box was severely damaged by the crash and only contained the cockpit voice recorder. It did not contain the vital flight data recorder, which is still missing.

Investigators are now looking for the flight data recorder, which will give them vital clues about the workings of the aircraft’s engines, controls and systems and its speed, height and attitude when it crashed.

The Sukhoi Superjet is the first commercial plane to be designed and built in Russia since the fall of the Soviet Union two decades ago.

The aircraft is considered by many in the industry to be Russia's last hope for maintaining a commercial aircraft manufacturing capability. Built in partnership with Italy's Alenia Aeronautica, the aircraft has a high percentage of foreign-built components and subsystems.