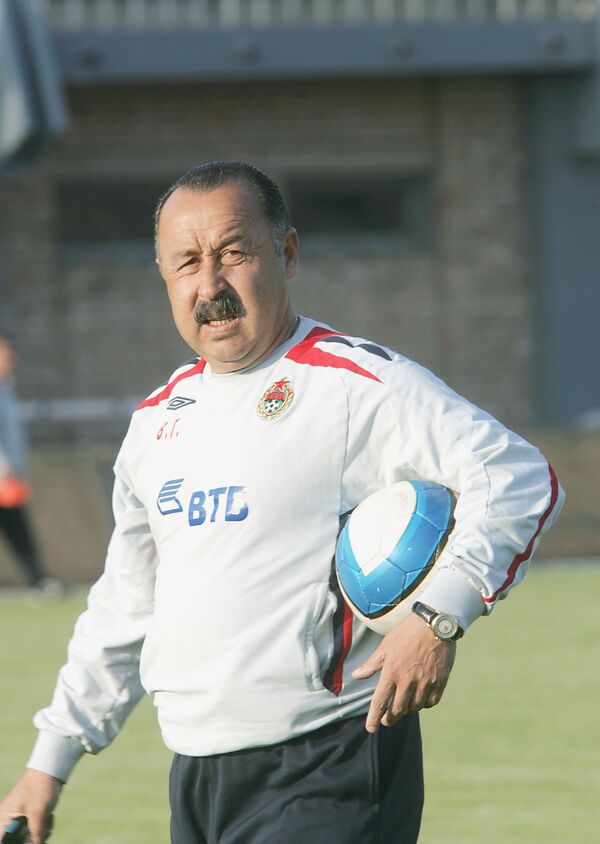 © Valentin Kabisha
/
Go to the photo bank
Subscribe
Former CSKA Moscow and Russia manager Valery Gazzaev should return to the national team post, as he is the only qualified candidate, ex-Manchester United winger Andrei Kanchelskis told RIA Novosti on Wednesday.

Former CSKA Moscow and Russia manager Valery Gazzaev should return to the national team post, as he is the only qualified candidate, ex-Manchester United winger Andrei Kanchelskis told RIA Novosti on Wednesday.

The post is vacant after Euro 2012, when incumbent Dick Advocaat has announced he would step aside.

Gazzaev, 57, is the second-most successful coach in the history of the Russian Premier League, having won four titles with CSKA and hometown side Alania Vladikavkaz, where he is club president.

"I don't see any candidates but Gazzaev among the Russian specialists," Kanchelskis said.

"He is the type of the coach the team needs now. Firstly, due to his immense authority his teams are always united."

"No one has such an ability to motivate for the result as he does. Secondly, he is a very competent professional, thoroughly knowing his work, acting strictly and correctly."

Gazzaev is one of several names linked to the post, with Russia under-21 coach Nikolai Pisarev, Rubin Kazan’s Kurban Berdyev and former Russia coach and current Dynamo Kiev manager Yuri Syomin also among those in the frame.

Meanwhile, Marat Izmailov can play a leading role for Russia at the tournament in Poland and Ukraine next month, Kanchelskis said.

Izmailov, who got a surprise recall after almost six years in the international wilderness, has shown the kind of consistency that makes him one of the most dependable squad members, he said.

"The stability he is showing in Lisbon gives hope he will become regular starter and maybe even one of the leaders," Kanchelskis said. "Marat has a good experience of playing in a normal championship, why not to be the one can be?"

Izmailov, 29, won the last of his 31 caps in a 1-1 draw with Israel in October 2006. Injuries and competition for first-team placed meant that he has played only 13 games for Sporting this season, but helped the club to reach the Europa League semifinal.

During his time in Britain, Kanchelskis became the only player to score in the Manchester, Liverpool and Glasgow derbies, and won two Premier League titles and the FA Cup with Manchester United.

He is currently the manager of ambitious Russian third-tier site FC Ufa.