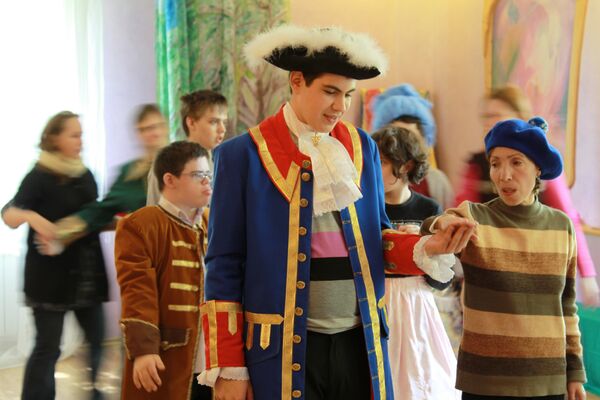 At Moscow's St. George's school for mentally handicapped children, students are rehearsing a play for their end-of-term celebrations.

A local TV crew is filming as half a dozen parents anxiously watch their children trying to adopt the mannerisms of 18th-century Russia.

"This school helps my grandson feel that he is alive," said Galina, as 15-year-old Igor, dressed in a Tsarist-era costume, plays the lead role in Alexander Pushkin's tale of an African slave who rose to become the Russian army's chief engineer.

Like many students at St. George in the southeastern Lyublino neighborhood, the city's only non-state institution to cater for mentally disadvantageous children, Igor suffers from cerebral palsy, and cannot speak. He requires constant care and help with all aspects of daily living.

Some 50 children - suffering mainly from Down's Syndrome, autism and schizophrenia - are currently studying at the school.

"All of what you see around you has been done to help the children develop," chief teacher Olga Kuryanova said. "Every centimeter of this building has been designed for work with such students."

St. George had a scare last month, when Lyublino officials threatened to close it down, saying free classes for local residents were a better function for the outwardly drab Soviet-era building.

The authorities seemed to back down earlier this week, allowing the school to rent the building for another year.

But Kuryanova complained that similar problems could arise again when the lease runs out next year, saying the issue must be viewed in a wider context.

"I tried to do something similar at a state school for 10 years, but then quit," she said. "The authorities don't seem to care."

More than half a million children with mental disabilities live in Russia, according to figures announced by a senior government official last month.

But despite tentative government attempts at integration, it remains a delicate issue. Many, including high-ranking officials, appear openly prejudiced, with Lyublino municipality head Sergei Buyankin reportedly saying last month that "Hitler buried such children alive in the ground." Buyankin refused to comment when contacted by RIA Novosti.

"We have been talking about it for ages, but today, it's only a question of education, there are no workplaces for the disabled," she said. "For that, you should create special conditions."

"There is no system of supporting job placement our country, where a mentor provides training and supervising for employees at a workplace," said Mikhail Novikov, an analyst at the regional organization for the disabled, Perspektiva.

"We should not forget that disabled children should be taught things that normal people may regard as simple. But if they learn them, the can become very effective workers," he said.

"In the government structures, they don't really know how to approach this issue," Novikov said.

Back at St. George, workshops are filled with perfectly crafted wooden models and figurines. There are swords, ship masts, and even park benches in the spacious room.

"They make all of this themselves," teacher Valery Ignatov said. "As soon as a child gets involved, they can do wonderful things. They can work together, and then they learn to cooperate, they can feel life by touching the wood."