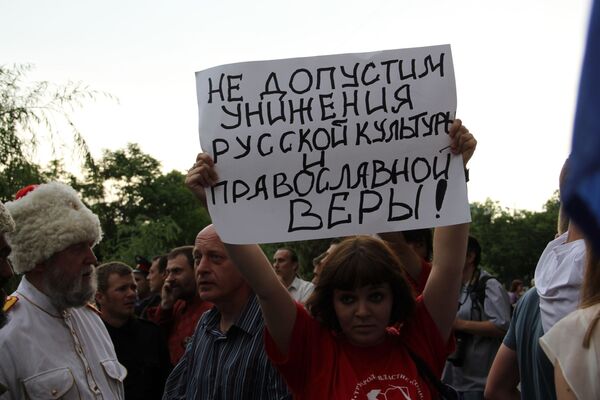 Cossacks and radical traditionalists picketed two modern art exhibits by prominent curator Marat Guelman in the southern Russian city of Krasnodar this week, trying to storm the premises and spitting in his face.

Some 40 activists protested the Danger! Museum exhibit in Krasnodar on its opening day on Wednesday, the exhibit's organizers said.

The protest was peaceful, unlike the one that targeted Guelman’s Icons project elsewhere in the city.

About 150 activists led by an Orthodox Christian priest disrupted the opening on Tuesday by attempting to storm the exhibit. Fifteen were arrested and await court hearings.

The priest, Alexy Kasatikov, tore sunglasses off Guelman and spat in his face, Nr2.ru regional news website said. The curator said he was “astonished,” but had no plans to sue.

“I’ve done a lot of thinking about whether I need Krasnodar. Now I know we won’t be happy unless we whack out obscurantism on its home turf,” Guelman said on Twitter. Krasnodar region is the capital of a traditional Cossack region and a stronghold of the Russian Orthodox Church.

The Icons exhibit, which opened on Wednesday without any further incidents, features no explicit blasphemy, comprising works such as blurred reproductions of Christian icons or metal silhouettes of saints.

The protests come hot on the heels of a scandal in Novosibirsk, where another art exhibit by Guelman was denied lease twice since April, eventually falling through earlier this month. Critics accused governor Vasily Yurchenko of masterminding the situation, though he denied the rumors.

Guelman has successfully established earlier a modern art museum in the city of Perm in the Urals, winning the backing of then-governor Oleg Chirkunov, but the project’s future is uncertain due to Chirkunov’s removal in April.

Russian traditionalists focused their ire on Guelman, arguably the country’s most renowned art curator, after he was accused of backing Pussy Riot, a feminist group who performed a “punk prayer” at the Christ the Savior Cathedral in February.

Three alleged group members were arrested and face up to seven years in prison on hooliganism charges.

The church has supported the crackdown, while its opponents denounced the proposed punishment as too harsh and called it a consequence of the creeping clericalism in the country.

The leadership of the Russian Orthodox Church came under fire in the liberal media lately in connection with the alleged riches of its head, Patriarch Kirill, as well as the Pussy Riot crackdown. Analysts said the attacks were backlash for Kirill supporting Vladimir Putin’s successful presidential bid earlier this year.