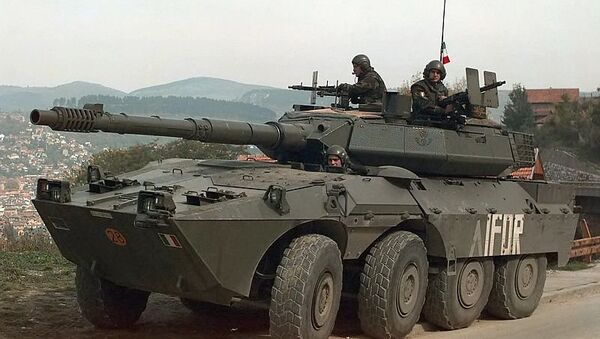 Russia is testing Italy's Centauro wheeled tank and considering building it under license, a representative of the Oto-Melara company which makes the tank said on Saturday.

Russia is testing Italy's Centauro wheeled tank and considering building it under license, a representative of the Oto-Melara company which makes the tank said on Saturday.

"The first two machines with 105-mm and 125-mm guns are on trial at a Moscow Region proving ground," he said.

Two more Centauros with 120-mm and 30-mm guns will also join the trials in another six weeks. "The tanks will take part in laboratory, driving and firing trials," the Oto-Melara representative said.

When the trials are complete at the end of this year, Russia will consider creating a joint venture for production of the tank with an enterprise from the Russian military-industrial complex, he said.

Russian truck maker Kamaz in Naberezhny Chelny could be involved in the deal, according to a source in Russian arms sales holding Rosoboronexport.

Commenting on the report that Russia is considering building Centauro tanks under license, Yury Borisov, first deputy head of the military-industrial commission, said Russia will only buy foreign weapon models on a one-off basis to study the manufacturing technology and then set up its own production.

A number of military experts earlier said licensed production of those machines in Russia is unlikely.

Russia signed a deal with Italy in December for the semi-knocked down assembly of 60 Lynx light multirole armored vehicles (LMV) from Iveco, Deputy Defense Minister Alexander Sukhorukov said in January.

Oto-Melara, part of the Italian Finnmeccanica group, is part of the CIO joint venture with vehicle manufacturer Iveco to make military vehicles.