A Short History of the Superjet Program 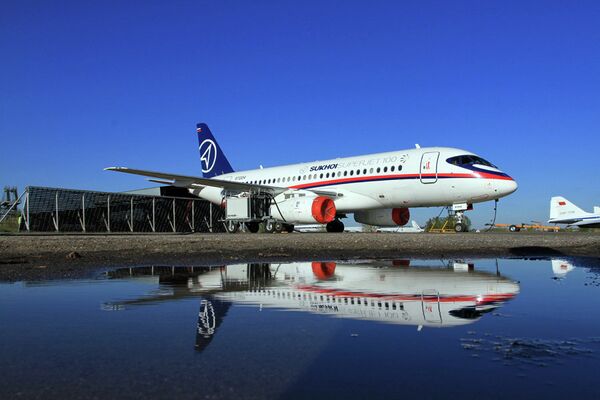 © RIA Novosti . Alexandr Kovalev
Subscribe
The Sukhoi Superjet 100 medium-haul regional aircraft, which has been in development since 2000, is the first new Russian passenger airliner design since the fall of the Soviet Union.

The Sukhoi Superjet 100 medium-haul regional aircraft, which has been in development since 2000, is the first new Russian passenger airliner design since the fall of the Soviet Union.

It is also the first civil aircraft for Sukhoi, known for its fighter jets. The bureau brought in a variety of foreign partners to develop the Superjet, including Boeing, whose specialists were involved in designing the aircraft.

Other foreign companies to work on the Superjet included Italy's Finnmeccanica as a major investor, France’s Snecma for the engines and Thales for avionics, and German firm Liebherr for steering and life support system.

The program fell behind due to engine development and certification delays. The Superjet performed its maiden test flight in 2008 and was certified for operation in Russia in 2011 and the European Union in February 2012.

The twin-engine Sukhoi Superjet 100 can seat up to 100 passengers, has a cruise speed of 828 km/h and a maximum range of between 3,000 and 4,500 kilometers with a full payload, depending on seating capacity.

The jet is aimed to replace the obsolete Tu-134 and Yak-42 and compete with Brazilian Embraer E-Jets and Canadian Bombardier CRJ, offering a cheaper alternative to both at $35 million per unit.

The aircraft was selling slowly but steadily in a highly competitive market, with Russia’s Aeroflot operating seven Superjets and Armenia’s Armavia one. Neither carrier has grounded their Superjets following this week’s crash in Indonesia.

Sukhoi had orders for 168 Superjets 100 prior to the crash, including from Russia’s Transaero. It remained unclear whether any of the clients intend to withdraw their orders.