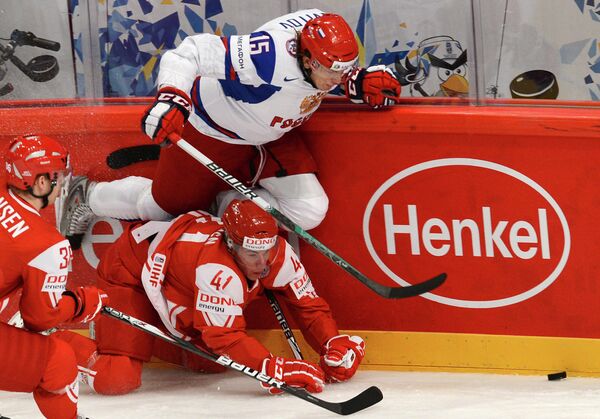 Russia’s underwhelming start to the world championships continued Thursday with a sluggish 3-1 win over Denmark.

Similarly to Russia’s opening wins over Latvia, Norway and Germany, the team made defensive lapses and struggled to score, a worry before the team faces top-level opposition for the first time against Sweden on Friday.

Dmitry Kalinin gave Russia a two-goal advantage mid-way through the second period that proved too much for the Danes, who boasted three NHL players in their squad, to overcome.

Russia struck after two minutes with a fierce strike from Evgeny Medvedev, out wide and just in front of the blue line, who smashed the puck into the top corner of Simon Nielsen’s goal.

Denmark hit back two minutes later, when a pass from Montreal Canadiens forward Lars Eller ricocheted into the goal off the heel of Russian defenseman Ilya Nikulin’s to level it at 1-1.

Denmark nearly stole a second as Nikita Nikitin lost control of the puck close to his own goal, allowing Frans Nielsen to fire a shot that was saved by goaltender Konstantin Barulin.

Thirteen minutes into the first period, Pittsburgh Penguins center Evgeni Malkin gave the Russia the lead again as Alexander Perezhogin cut inside from wide before hooking the puck back for Malkin, in space eight yards out, to fire in a shot that went into the net off Nielsen’s shoulder.

Russia started brightly in the second period, with good chances for Sergei Shirokov and Nikolai Zherdev, but a defensive lapse allowed Denmark’s Morten Green to mount a dangerous, albeit unsuccessful counterattack.

Six minutes into the second period, Shirokov played in 19-year-old prodigy Evgeny Kuznetsov, who bore down on Nielsen’s goal before stopping the puck for Kalinin to smash in.

Barulin, standing in for Colorado Avalanche goaltender Semyon Varlamov, then pulled off a spectacular save to deny Julian Jakobsen, parrying the Dane’s first shot before stretching his left skate just wide enough to deflect the rebound onto the frame of the goal after Jakobsen brought the puck around the net.

Early in the third period, Russia proved unable to extend its lead, as Nikolai Kulyomin missed a penalty shot awarded when Jesper Jensen was disciplined for hooking.

Zherdev saw his shot saved after stealing from the goaltender with 10 minutes remaining, with Nielsen able to maneuver into position just enough to deflect the shot with his skate.

Barulin was called into service again with three minutes left as a long pass found Jannik Hansen one-on-one with the goaltender, only for Barulin to block Hansen’s effort.

The U.S. won its first two games - 7-2 against France and 5-4 in overtime against Canada - but lost its last one against Slovakia 4-2.

The win takes it to third on eight points behind Canada and co-host Finland.

Belarus lost 1-0 to Finland and 3-2 to Switzerland before beating Kazakhstan 3-2 on Tuesday.