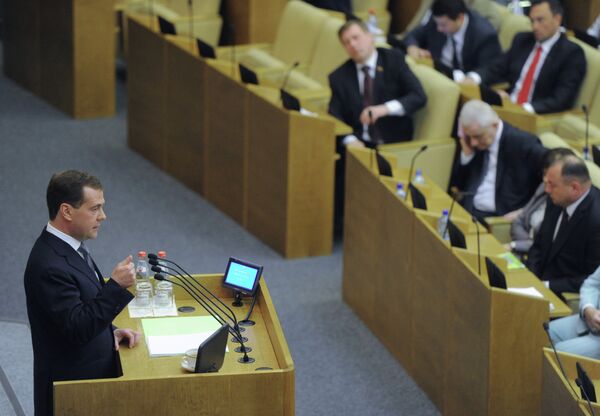 He was confirmed as the country’s new prime minister by a majority of votes in the State Duma on Tuesday. United Russia and Liberal Democrats factions, all in all 299 deputies, voted in favor of his candidacy, 144 lawmakers - Communists and A Just Russia members - voted against.

“We should build system of placement and implementation of state defense orders as well as a system that will control the money expenditures; this system should be really efficient. I believe, we should take this into account when forging a new government,” Medvedev said when lawmakers were discussing his candidacy for the post of prime minister.

Speaking about state defense orders, Medvedev emphasized that proper disposition of funds is one of the most important issues. “We have quite enough money – 20 trillion rubles ($666.02 billion) that should be invested into the production of new types of weaponry and a program of reformation and reconstruction of our defense complex.”

Vladimir Putin, who was sworn in as Russian president on Monday, has instructed the government to draft proposals on creating federal executive agencies, which will be responsible for the placement and implementation of state defense orders.

The Defense Ministry’s federal service for the defense order and federal agency for defense supplies are currently handling these issues.

Putin also said the number of contract servicemen in the Russian Armed Forces should be annually increased by no less than 50,000 people.