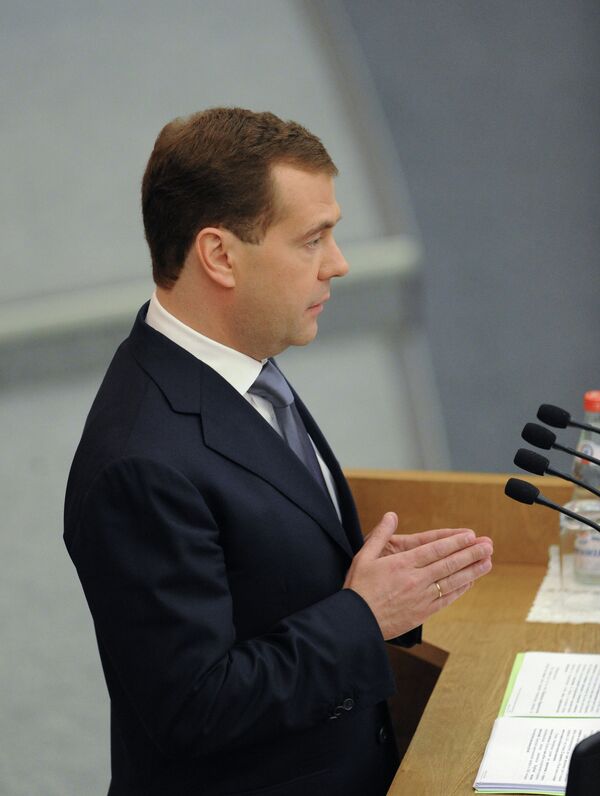 President Vladimir Putin submitted Medvedev’s candidacy for the post shortly after his inauguration as president on Monday. Medvedev occupied the presidential post in 2008-2012.

United Russia and Liberal Democrats factions, all in all 299 deputies, voted in favor of his candidacy, 144 - Communists and A Just Russia lawmakers - voted against.

Before the vote on Tuesday, Putin introduced Medvedev to the lawmakers as an experienced politician who stood behind crucial reforms in the country

“In an open dialog with civil society, he began serious reforms, reformed aimed to improve productivity of the government apparatus, the law-enforcement and judicial system that could protect people and defend truth and justice,” Putin said.

Following winter protests over the results of parliamentary elections, Medvedev pushed for liberalizing the law on political parties relaxing their registration requirements, and also campaigned for reintroducing direct gubernatorial elections. The proposals he made on Tuesday generally coincided with the decrees Puin issued May 7.

Putin also praised the former president for his modernization efforts and passion for technology as well as for projects to promote young talents.

After the complimentary introduction, the candidate prime minister took the floor and outlined an ambitious program for Russia’s further development.

To be approved as prime minister, Medvedev had to collect the majority of votes in the 450-seat Duma, which is at least 226 votes. United Russia, which earlier proposed Medvedev as its leader, holds 238 seats.

According to the legal procedure, Medvedev met with the four Duma factions on Monday and Tuesday before the vote.

United Russia and the Liberal Democrats promised to support his candidacy while the Communists and the A Just Russia factions said they would vote against the former president as they disagreed with his declared course.

Both Putin, former premier, and Medvedev said before the presidential polls in March that they would swap their positions if Putin won the elections.

Putin’s inauguration and the Duma vote on Medvedev took place amidst resumed opposition protests against “the stolen vote” in the elections. Some of the protests turned violent on Sunday, with police and protesters getting injured. In all, police arrested about 700 people in the past three days.